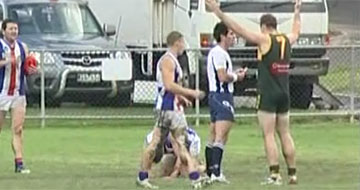 The Hampton Rovers suffered a disappointing defeat on Saturday, going down to Oakleigh at a wet and muddy Boss James Reserve.

After producing their best performance of the season the previous week at Old Ivanhoe, the Rovers had their most disappointing outing against the arch rivals, struggling all day.

After a multitude of rain throughout the week and especially overnight, Boss James Reserve was wet and muddy underfoot, which suited Oakleighs style of footy much better than the Rovers. The home side were dealt a blew losing Danny Corp while Ed Turner was also ruled out after picking up an injury the previous round.

The conditions made it a scrappy contest and the Krushers failed to kick straight in the opening term with one goal eight on the board, trailing the Rovers two goals three, by one point. For the home side it was Ben Trivett kicking both majors.

It was umpire appreciation round, and this VAFA Premier B round five contest had three field umpires, however some of the decisions handed out, especially in the second term, raised eyebrows amongst the gallery watching on. The Rovers were dished out two red cards by the men in white. Firstly to ruckman Anton Duddy allegedly for striking, however this charge was successfully defended by the Rovers at the VAFA Tribunal on Tuesday evening with the video showing minimal contact and the hit in fact coming from friendly fire. This was shortly followed by Nick Pinto also being showed a card. Both incidents saw no retaliation from the opposition, and the game was generally played in good spirits.

The Rovers had to battle it out for around 15 minutes with only 16 men on the field. That was always going to be a challenge, and Oakleigh began to take control of the game, while failing to fully capitalise on the scoreboard.

The Rovers struggled in the second half and it was Oakleigh who went in harder and won the ball. The seemingly card-happy officials dished out another red, this time to Matt Terech, further frustrating the crowd, but it was the visitors who got the job done, winning the match by 44 points and sending the Rovers to the bottom of the ladder.

The Rovers get a chance to rebound quickly and get their season back on track when they host St Bernards this Saturday, also at Boss James Reserve. The boys need your support so make sure you get down to David Street and cheer them on in this must-win game.

On a positive note, the Rovers had around 90 people in attendance at the special pre-game Ladies Lunch which raised funds for the National Breast Cancer Foundation. Click Here to read more.

To book online for this Saturdays pre-game Luncheon, Click Here!