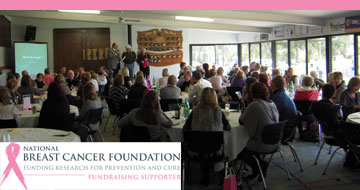 A fantastic luncheon was held at the Hampton Rovers Football Club on Saturday with around 90 guests in attendance: a mixture of women and men, well supported by Juniors, Seniors, sponsors and friends of the club.

Also in attendance were some distinguished guests, including the Honourable Louise Asher, Deputy Leader of the Liberal Party, Minister for Innovation, Services and Small Business, Minister for Tourism and Major Events and Local Member of Brighton as well as Deputy Mayor of Bayside City Council, Ms Louise Cooper-Shaw.

Guest speaker was Chelsey Tregear, a member of the Melbourne Vixens Netball team. Chelsey is a well decorated and accomplished netballer, who has captained Australia’s U/21 side and represented the state in teams including the U/17 (2000) U/19 (2001), U/21 (2002) and Open (2003-05), captaining the open state squad in 2005. Chelsea has also graduated with honours in podiatry from Latrobe University and is a qualified doctor of podiatry, with her own practice in Moorabbin.

Chelsea gave a very interesting and insightful presentation into what she believed made up a great leader. Her presentation culminated in a very moving, yet relevant, story about her best friends encounter, and ultimate defeat, of Breast Cancer. This very moving speech left not a dry eye in the house.

Once again Hampton Rovers shows that its reach in the community is far beyond the football field, with much needed funds raised from the lunch being donated to the National Breast Cancer Foundation.

Pink was the theme of the day and there were plenty of people who got in the spirit wearing pink attire. On the menu was a delightful chicken lunch over a few glasses of champagne. All ladies in attendance also receive a complementary gift bag which included items generously donated by Heritage Brands  www.heritagebrands.com.au.