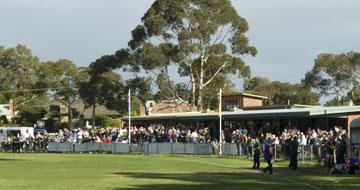 Its a massive day at Boss James Reserve this Saturday with a triple-header featuring the Seniors & Reserves taking on arch rivals Oakleigh and also the U19s playing St Kevins.

The Rovers have had a tough start to the 2011 VAFA Premier B season, taking on the top four teams in the opening four rounds (St Kevins, Caulfield, Uni Blacks & Old Ivanhoe), resulting in just the one draw in round one.

This Saturday the Rovers take on bottom-placed Oakleigh in the latest edition of this fierce rivalry that has developed since the teams first met in 2007. In their eight previous meetings, the honours are evenly split at four-each.

The Rovers somewhat returned to form last week against Old Ivanhoe with a much improved performance from the previous two rounds, with several players coming into the side, and theyll be looking to take another step forward this Saturday and record their first victory of the 2011 season.

All supporters should get along and support the boys in what could be described as a season-defining game, even at this early stage. The seniors commence at 2pm with the Reserves at 11:40am.

Opening proceedings are the Under 19s who take on St Kevins, commencing at 9:30am. Come down to Boss James Reserve early and support the young Rovers under the guidance of Tony Naumoff. Meanwhile the Thirds travel to Como Park to take on Old Geelong at 11:40am. Congratulations to Matthew Gray who plays his 150th VAFA game for the Rovers.

Get down to Boss James Reserve this Saturday for a big day of action!
Live scores available by following the Rovers on Twitter: @HRAFC