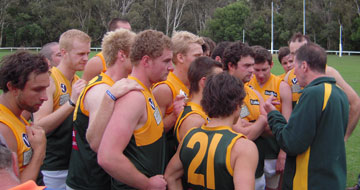 The Rovers put in a much improved performance on Saturday but were unable to come away with the win against second-placed Old Ivanhoe, going down by 21 points.

It was a different looking Rovers outfit from last week with some seven changes in personnel going into the game at Chelsworth Park.

The home side got off to a flyer, kicking five goals to nil in the opening term  that would prove the difference in the overall scheme of things on the scoreboard.

The Rovers did control a portion of the game, predominantly the second term as well as the opening period of the third.

The returning Nick Pinto kicked the first Rovers goal of the day early in the second and this was quickly followed by a major to Adam McNeil. However the Rovers missed several scoring opportunities, kicking three goals seven for the quarter.

Hampton again kicked the opening two majors of the quarter following the main break, with Alex Whalebone and Danny Corp converting. Corp finished the day with five, but it could have been more with the radar slightly off on the day.

At the other end, the Rovers defence had trouble containing Old Ivanhoe key-forward Owen Weatherley, with Gerrard Woods who did a superb job on the number 14 last year, missing from the Rovers side  he finished the day with six sausage rolls.

It was anyones game at the final break with the home side holding an 18-point advantage. The Rovers would have to do it without gun small on-baller Ed Turner who succumbed to injury at half time and was done for the day.

The Rovers fought hard but were unable to reduce the margin in the final stanza, with both teams kicked three goals and the home side missing some they should have kicked. The final siren blew handing Old Ivanhoe a 21 point victory  their fourth from as many games.

Anton Duddy was at his best while Leigh Fletcher was everywhere for the Rovers with Richard Atkins and Mark Devereaux also having good games.

Plenty of positives came from the Rovers and the boys are back on the way up. The fought hard all day and put in their best performance since the opening round draw against St Kevins. This Saturday the Rovers look forward to taking on arch rivals Oakleigh at Boss James Reserve.

The Reserves had a good first half, down by a goal at the main break, but couldnt continue on in the second half, going down by 11 goals. Jesse Donald, Carl Emmins and Nick Henry were best with Jason Giasoumi and Adam Power both kicking two goals for the Rovers.

The Under 19s fought hard but went down to Ormond at Boss James Reserve with Marlon Woltering, Lachie DeLisle and Victor Cinco best and Scott Brandon kicking three majors. While the Thirds went down to Hawthorn with Jason Laver best and Andrew McLorinan kicking three.