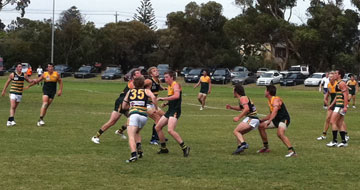 The 2011 VAFA season got off to a dramatic start at Boss James Reserve on Saturday with Hampton Rovers and St Kevins sharing the spoils in a hard-fought contest.

St Kevins are always one of the more fancied teams going into the season and they looked in control for the majority of the game. The visitors held a 16-point advantage at three-quarter and looked to have the game in the bag, kicking with the five-goal gale in the last. However the weather gods came into play and as the lights took effect, the cool change swept through and nullified the wind advantage.

The Rovers came out all guns blazing in the final term and kicked the opening two goals as the rain started to pelt down. The demons of Round 18 last year at the Boss must have been coming back to haunt the visitors. Another Hampton goal had the crowd going nuts with the Rovers holding a 7-point advantage.

However the visitors returned fire, first with a behind and then their only major of the final term to tie the scores. The final seconds saw the Rovers control the ball but they were unable to get the ball deep inside their 50 and the siren blew with the scoreboard all square at 11.12.87 apiece.

The season opener was played in front of a typically large Rovers crowd and it was warm and windy conditions at the Boss with the strong wind favouring the David Street end.

Many were keen to see how the new-look Rovers would perform under new coach Russell Barnes. Young-gun Alex Whalebone made his senior debut for the Rovers while Zack Alcott played his first game for the club.

Several of the younger players from the U19s last year such as Tom Youl and Richard Atkins played great games, as did Danny Corp who kicked four majors and the ever-reliable Gary Carr. The other multiple goal scorer was Josh Verlin, who between his ruck duties, kicked two.

The Rovers failed to take full advantage of the wind in the first, kicking three goals four, holding a nine-point lead at the first break. However the visitors didnt blow the game apart in the second term, managing four goals to the Rovers one. When St Kevins outscored the home side by a goal in the third term, all looked lost for the Rovers.

But a dramatic final stanza was great footy to watch and the Rovers really should have taken all four points to open the season, but to walk away with half that definitively isnt a bad result and its a platform for the Rovers to build on moving into Round 2 against Caulfield Grammarians.

The Reserves were well defeated by a very strong St Kevins side. Although the Rovers never gave up all day which pleased Anthony Quon on his coaching debut in the Reserves. Jordan Goss was best for the Rovers  he also kicked two goals, with new recruit Ben Trivett the other goal kicker with one.

The Under 19s also suffered a heavy defeat going down to Old Mentonians. However the boys worked hard and they will take some time to get going, considering just three weeks ago we had 7 players committed and now have around 30 in the squad which is a fantastic work by new coach Tony Naumoff.

The Thirds had a bye and will open their season this Saturday against Ajax at home.