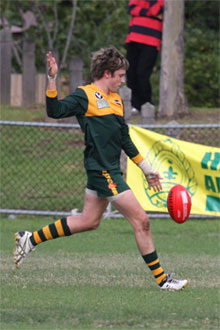 Gary Carr has retained the senior captaincy for the 2011 season while four vice captains have been appointed.

The 2011 season was launched Thursday evening at Boss James Reserve with the leadership group announced as well as the three teams for the opening round. (The Thirds have a bye this weekend)

A vote was put to the players recently and Gary Carr, who was appointed senior co-captain last year, proved the popular choice amongst his peers. He takes the role on by himself in 2011.

Gary Carr is a three-time senior best & fairest winner at the Rovers and first played for the club in 1998. He has played a total of 201 club games, played in the 2001 C Section Premiership and represented the VAFA on one occasion. Gary is one of the more experienced players in the side and has been a consistent performer for many years.

Meanwhile, Ben Kezilas will lead the Reserves while Matt Care has been appointed captain of the Under 19s.