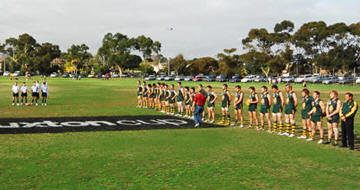 The Rovers open the season against St Kevins on Saturday at Boss James Reserve, in a re-match of the round 18 encounter from last year in which the Rovers recorded a stunning victory and knocked the premiership contenders out of the finals race. Redemption will be high on the agenda and it promises to be an enthralling encounter.

Its a new-look Rovers side with a number of key players leaving over the off-season to play for money in the country.

On the flip-side, the club has so far signed 33 players to the senior ranks with at least a handful of those expected to feature in the firsts during the year. The incoming players include players transferring from other clubs, coming up from the Rovers juniors, new players to the club, returning players including several from the 2009 U19 premiership side, as well as a few Canadians playing at Hampton in the lead-up to the AFL International Cup later in the year.

The Rovers will field a somewhat youthful side in 2011 however theyll be supported by quality and experience with the likes of Gary Carr, Anton Duddy, Gerrard Woods, Guy Martyn & Daniel Corp all backing up for the green and gold this year.

Its also a new-look coaching panel in 2011. Russell Barnes who has previously won a senior premiership at the Rovers, returns to the club following a decade away. Hell be supported by former Sandringham Dragons and Parkdale Vultures coach Steve Kennedy, as well as Brendan Robbins, Anthony Quon and Jaye Macumber.

The Rovers pre-season campaign got off to a slow start with losses to Ormond and Ocean Grove however as more players have become available, more positives have been taken from the games. Last week the Rovers had a great hit-out against SFL Div 1 side St Pauls, going down by 2 points, while in the final practice game on the weekend the Rovers finished all-square with Old Camberwell.

2011 VAFA Premier B section promises to be an absorbing campaign with local derbies against the likes of Old Brighton, Beaumaris, Caulfield and Oakleigh.

Hampton Rovers will again field four teams in the VAFA (Seniors, Reserves, Thirds & U19s) and while numbers are strong, there are still spots available for anyone wishing to play in 2011, especially at Under 19 level. Visit the website or contact the club for details.

The action gets underway this Saturday at Boss James Reserve, David Street Hampton. The club as always will host a pre-game luncheon with all supporters welcome. 2011 club memberships are now available and can be purchased online at www.hamptonrovers.com.au.