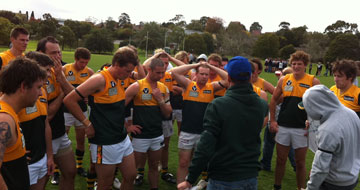 The Rovers recorded a draw with Old Camberwell in their final practice match on Saturday and now look forward to the season opener against St Kevins this Saturday at Boss James Reserve.

It was the fourth practice game for the Rovers and the team has improved significantly each match. Saturdays encounter at Gordon Barnard Reserve again saw a number of changes in personnel. It was a solid hit-out for the young Rovers side and senior coach Russell Barnes saw plenty of positives to take from it.

The Rovers open the 2011 VAFA Premier B season this Saturday taking on St Kevins Old Boys in a re-match of the classic Round 18 encounter from last year in which the Rovers defeated the premiership contenders and knocked them out of the finals race. Revenge will be high on the agenda and its sure to be another great game at the Boss.

Also this Saturday, the Under 19s open their season against Old Mentonians away, while the Thirds have a Bye first-up before taking on Ajax the following week.

The Season Launch (Jumper Presentation Night) will be held this Thursday evening at the club following training. All supporters are welcome along.

Bookings are now being taken for the opening pre-match Presidents Luncheon of 2011. Be part of all the build-up to the opening bounce of the season! For details and bookings, click here.