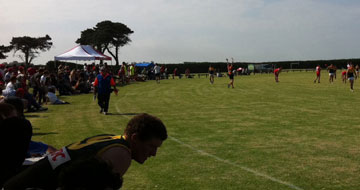 Hampton Rovers made the long trek down the Geelong Freeway to take on Ocean Grove in their second practice game of 2011.

It was a considerably stronger Ocean Grove outfit than last year and they went into the game at full strength according to coach and former Rovers player and coach Cameron McGregor.

The Rovers had a few inclusions who came into the side but it was still a predominantly a youthful team who took on the experience of the Grubbers. The Rovers came out in the warm and windy conditions and had an excellent opening term. However from a few minutes on in the second term until the final break it was the home side that controlled the game. The Rovers had a better last quarter but it was Ocean Grove who ran out comfortable winners.

It was a good hit-out for the Seniors and Reserves and there were plenty of positives to take from both games. The Rovers now look forward to returning to Boss James Reserve this Saturday to take on SFL club St Pauls. The Rovers will have a few players unavailable but will also gain a few from cricket commitments for what will be a good test as we head towards the 2011 VAFA Premier B season.

CLICK HERE TO VIEW A MATCH REPORT FROM THE SIDELINES.

Training continues this Tuesday and Thursday at Boss James Reserve from 6pm. For full details visit the Pre-Season page.