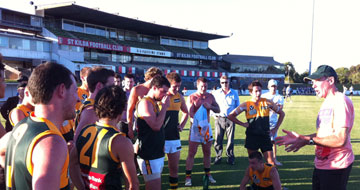 The Hampton Rovers had their first practice hit-out of 2011 Friday evening vs Ormond at Moorabbin. The build-up continues this weekend when the boys travel to Ocean Grove.

It was very much a youthful Rovers side that went down to Ormond at Moorabbin. With a large majority of regular senior players unavailable, the game provided a great opportunity for some of the younger guys and new players to the club to have a run against an Ormond side who had the luxury of rotating almost an entire side on and off the bench throughout the game. Still, there were plenty of positives to take from the game.

Training will continue Tuesday, Wednesday and Thursday this week. All three nights be at Boss James Reserve at 6pm, however Tuesday and Thursday will be held away from the ground due to the final week of cricket training. Numbers have been strong at training but there are still several players yet to turn up. With only 24 days until Round 1, now is the time! For full details, view the Pre-Season Page or for info on joining the club, Click Here.

This Saturday (March 19), the Rovers take on Ocean Grove, coached by Cameron McGregor. Numbers at training this week will decide if there are two or three games.  As with last years game, itll be held at the footy ground located within the Collendina Caravan Park, on Bonnyvale Road. Its approximately a 2 hour drive from Hampton. For all the details including a map, click here.