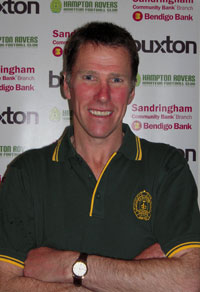 Its a return to Boss James Reserve for Russell who spent four seasons at the club a decade ago, including three as senior coach, the first of which he successfully led Hampton Rovers to the C Section premiership in 1998.

Following Matthew Robbins decision to step down as senior coach and instead play for the Rovers in 2011, a coaching sub-committee was formed to find the most suitable candidate to take the club forward. The quality of applicants was high and the sub-committee went through a vigorous and thorough selection process. In the end Russell Barnes was chosen as the clear standout and the best candidate to lead the Hampton Rovers to success.

Russells achievements speak for themselves. A decorated playing career with Ormond in the VAFA where he played over 250 games including six seasons as captain during which time the club won four A Grade premierships. He also represented the state on 12 occasions and was vice-captain for two years.

Russell commenced his coaching career with Old Brighton in 1994 before two years as assistant coach at Ormond. He first joined the Hampton Rovers in 1997 as assistant coach before taking the reins in 1998 and winning the C Grade premiership. In 2001 he took on the coaching role at St Bedes Mentone and led them for five years. He has since spent two years at Beaumaris and two at Ormond where he won another C Section flag, defeating the Rovers in 2008.

Following a year off Russell is refreshed and ready for a new challenge.

Hampton Rovers Seniors President, Jim Westhead, had the following to say following the appointment, The club is extremely excited about the future and the part Russell will play in our plan for the Rovers over the next few years.

Russell was obviously thrilled with the appointment and had the following to say
Its such a different scenario to any other coaching job Ive had and Im really excited about the opportunity to do it. Its a good feeling and hopefully we can have some success as we did the last time I was at the club.

Plans are already well under way for the commencement of 2011 pre-season training with details to be announced soon. A meet the coach evening will be held on Wednesday 27th October from 7:30pm at Boss James Reserve. All players are encouraged to attend and supporters are also most welcome.

The club is also pleased to announce two additional appointments. Firstly Anthony Quon as Reserves coach for 2011. A past player, Anthony has coached Hampton Rovers Under 19s for the past three years which included the 2009 premiership.

And secondly were delighted to announce Tony Naumoff as new Under 19 coach. Also a former player, Tony has previously coached several seasons in the juniors and six seasons in the Reserves including the 2004 premiership. More recently he coached the Monash Gryphons AFC before returning to the Rovers this year where he was senior runner.

Entering their third successive season in the second-top division of the VAFA, Hampton Rovers has high hopes for 2011. The entire club is thrilled with all its key coaching appointments and is looking forward to what lies ahead.