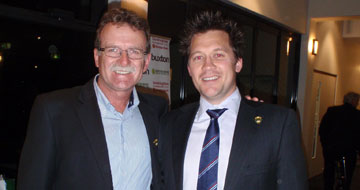 Both have had long histories at the club and continue to be involved up to this day. The two were presented with their life membership medallions in front of 130 people in attendance and were elated to receive the prestigious award.

Gary Nash has had over 40 years involvement with the club. He started playing when he was 16 years old and won an U19 premiership.  In the 1972 season, he won the U19 best & fairest playing just 12 games, while for the other six games of the season he played in the seniors and came runner-up in that best & fairest! Gary went on to win a senior best and fairest and captained the club for three years. After his playing days, Nashy was coach of the Seniors and Reserves, boundary umpire for the U15s, Runner for the U17s, Selector and Runner for the Seniors for many years, and today continues to attend the Home Game Luncheons and coordinate guests for the lunches and social functions.

The Anderson name goes hand-in-hand with the Hampton Rovers, and Stephen is no exception. He started in the juniors before playing over 260 games in the seniors, equating to over 400 club games. The number 4 for the green n gold won the senior best & fairest on two occasions and captained the club for three years from 2000, including the 2001 C grade premiership. Ando also won the VAFA C section competition best and fairest in 2000 and has represented Victoria in state games. He has served on both junior and senior committees, coached in the juniors, been a mascot and scoreboard attendant, and performed many other duties around the club. Stephen pulled on the boots again in 2010 playing a few games in the Thirds and one appearance alongside David in the Reserves for his brothers 200th VAFA game.

Both Gary and Stephen are most worthy recipients of Hampton Rovers AFC Life Membership and the club congratulates both for their achievement.