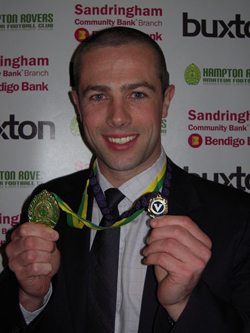 130 people were in attendance at the 2010 Hampton Rovers Presentation Night at the Sandringham Football Club on Saturday evening.

In the Senior vote count, Fletcher couldnt be beaten after the 17th round, and polled a perfect 15 votes in the final game of the season to finish on 99 votes, 24 more than runner-up Mark Devereaux. The other senior awards went to Ryan Semmel, David Robbins, Gary Carr and Chris Gleeson.

Ben Kezilas was best in the Reserves with Daniel Anderson runner-up. The Thirds was won by Adam Power while there was duel-winners in the Under 19s with Jack Sperring and Tom Youl both finishing on 89 votes.

Another significant award presented was the 2010 Best Senior Clubman  won this year by Lachlan Wheeler. As well as club secretary and co-captain of the Reserves, Lachie has worked tirelessly around the club performing countless duties and is a deserving winner of this award.