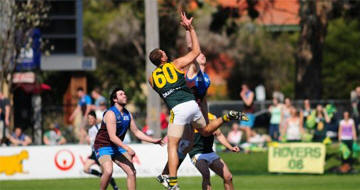 With the relegation of Old Brighton and promotion of Beaumaris and Caulfield Grammarians, 2011 in VAFA Premier B promises to be closer than ever, in more ways than one.

While the second tier in 2010 was one of the tightest in VAFA history with just two wins separating first to eighth at one stage, next year promises to be an exciting season with some mouth-watering match-ups and plenty of local derbies.

Hampton Rovers will re-ignite rivalries with local clubs Old Brighton and Beaumaris in 2011 while Caulfield Grammarians are also a club not too far from the Boss.

Meanwhile one local team, Old Haileybury, won their Preliminary Final against University Blacks on the weekend meaning they’ll play in Premier division next year along with Old Carey who are also promoted.

Coming down from Premier Section with Old Brighton is Marcellin who managed just the one win after being promoted the previous season. Brighton had a disappointing season notching up just three wins.

In Premier C, Caulfield and Beaumaris play off in the Grand Final this Sunday at Trevor Barker Oval. The Sharks defeated Ajax last Sunday in the Preliminary Final.

2011 will also see three district clubs up in Premier B for the first time since 1999  back then it was Hampton Rovers, Beaumaris and Ormond representing the non-old-boys.

The prospect of local derbies against Beaumaris, Old Brighton, Oakleigh and Caulfield is exciting and will no doubt ensure big crowds pack the Boss in 2011.

Meanwhile the Hampton Rovers continue their search for a new senior coach for 2011. Applications remain open until the 22nd of September. Click Here for details.