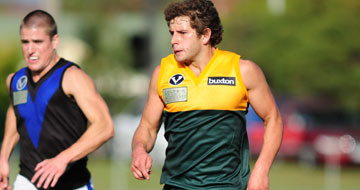 Hampton Rovers co-captain Ryan Semmel is one of six VAFA players selected in the AAFC U23 squad to visit South Africa on a historic 13-day tour commencing late September.

The AAFC (Australian Amateur Football Council) is made up of the VAFA, SAAFL, WAAFL & Tassie North. A triennial series is held between the four states  in 2010 the VAFA defeated Tasmania by 71 points at Ulverstone. Both Ryan Semmel and Chris Gleeson represented the Hampton Rovers in the game and performed well, with two goals each and Semmel named in the best.

The participants will tour Johannesburg and Cape Town; play a match against the national South African Lions team and an International friendly where the two teams are mixed to play the game. This trip is bigger than football and it will involve working with local people in townships and teaching them the skills of Australian Rules football and learning about the vast cultural differences and similarities of South African people and their way of life. A number of other activities are also planned for the trip.

Six players from each of the four states have been selected in the 24-man AAFC U23 squad to travel to South Africa. The AAFC has been working with the AFL to organize this trip and they go with the endorsement and support of the AFL. The squad will leave on Tuesday 28th September and return Sunday 10th October 2010.

While the trip is being partially subsidised by the VAFA, the Hampton Rovers Football Club is assisting Ryan in raising funds for the trip. A number of activities have already taken place at the club and more will be done over the coming month, including at the Presentation Night on the 18th of September to assist Ryan. Anyone wishing to assist may also contact the club directly.