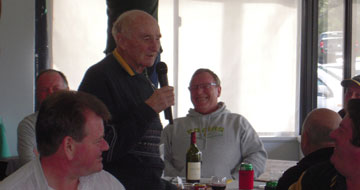 At last Saturdays final home game luncheon of the year, Athol Porter was recognised for his 60 years continuous service to the club with a special plaque.

The plaque, titled Athols Corner has been erected in the social rooms at the north-east corner where he sits during every luncheon prior to Hampton Rovers home games.

Despite missing a few games recently due to being in hospital, when he has been at the club he continues to get things done, in spite of everyone ordering him to sit down and relax. Athol ensures the Hampton Rovers and Australian flags are raised for all senior home games as well as the sign on Bluff Road letting people know the Rovers are playing at home.

A life member of the club, Athol has done many roles at the Hampton Rovers over the years, despite never playing a game. He attended his first Rovers game in 1950 to watch his brother Kelvin. A year later he saw Rovers beat Ormond with the last kick of the day to win their only A-grade premiership.

Click Here to read an article of Athol Porter that appeared in the Herald Sun in 2008.