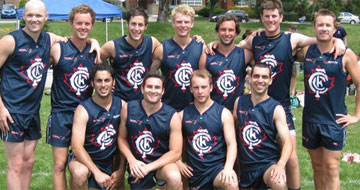 The Rovers has supported the promotion of Australian Football overseas for a number of years now, with links to a couple of USA clubs, exchanging players and hosting countries during previous AFL International Cups.

The relationship between the Hampton Rovers and Central Blues commenced last year with Rovers player Daniel Andersen playing for the club during his stay in Canada. Daniel went on to win the club best and fairest. Since then three more Rovers players have pulled on the navy blue: Kyle Pinto, Nick Pinto & Daniel Corp, all three of which are currently in Canada and playing for the Blues.

With Australia hosting the AFL International Cup in August 2011, its anticipated a number of Central Blues players will play for the Hampton Rovers next year in the lead-up to the tournament. The Rovers will also look to host the Canadian team for a night at the club.

The Central Blues Australian Football Club entered the Ontario Australian Football League (OAFL) in 2006. The OAFL is one of the largest organised footy leagues outside of Australia. Formed in 1989, the league has gone from strength to strength. There are 10 Division 1 teams in the league. The OAFL is also developing a Division 2 competition, which currently consists of six sides including one from Quebec. The league is unique in that the Division 1 competition limits the number of Australians on the field to six per side at any given time. This policy ensures a more even spread of Aussie talent as well as encouraging sides to develop their Canadian stocks.

The OAFL is proud to be one of the major breeding grounds and suppliers of Canadian players for the Canadian international squad, Team Northwind – which competes in the AFL International Cup which is held every two years in Australia. The Blues are proud to have had five players who represented Canada and the Blues in the 2008 International Cup.

A large part of being able to developing quality Canadian players is ensuring that the club has quality Australian players to help teach the game. In the last two years the Hampton Rovers have provided the Blues with Aussie players including Daniel Andersen, Kyle & Nick Pinto and Daniel Corp – who have all made exceptional contributions towards helping improve the Canadian players.

The Blues have featured in the finals in the past two seasons and look well on their way to their third finals appearance in season 2010, currently sitting 2nd on the ladder after 12 rounds of football. The Blues only defeat this year has been at the hands of the undefeated 2009 OAFL Premiers, the Toronto Eagles.