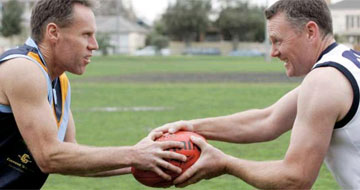 Dads around Bayside are dusting off their boots getting ready for battle this Sunday at Boss James Reserve.

The Battle of the Boots is an annual football match between fathers from Hampton and St Marys Primary schools. The dads goal is to raise money for school improvements and breast cancer research.

This is the Battle of the Boots fourth year and the teams said they were looking forward to the faceoff.

Organiser Steve Marron said the event had a great family atmosphere and lots of giggles.  Theres a lot of ex-footy players on the field so its competitive but its all in good spirits, he said.

Mr Marron encouraged people to come early to watch the under-9 primary school teams before the main event. The dads hope to raise $15,000. Entry is free.

The game will be held at Boss James Reserve, David Street Hampton this Sunday at 1pm.

A big crowd is expected and everyone is welcome along for whats always a great day. The Rovers Bar will be open until late.