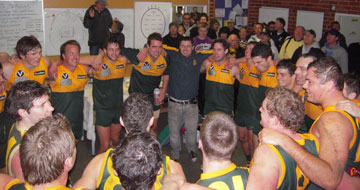 The VAFA Premier B home & away season finished in spectacular fashion on Saturday with Hampton Rovers knocking St Kevins, one of the pre-season premiership favourites, out of the finals with a gutsy 14-point win.

It was Matthew Robbins final game in charge of the Rovers and despite going into the game with numerous key players missing, each and every one of the 22 players gave it their absolute all, turning around a five goal deficit at quarter time to run out winners.

The Rovers had the likes of Alexander, Corp, Curry, Martyn, Woods all missing, while St Kevins also went into the game with some big names out of their lineup. Kyle McNeil made his senior debut for the Rovers alongside his brother Adam while Ash Fisher was promoted for the first time this year.

The Hampton Rovers players made their way onto the ground through the clubrooms with the large crowd in attendance at the pre-game Luncheon giving the players a loud cheer to fire them up for the final game of the season.

While Old Carey had already secured the minor premiership, four teams were in equal-second with only three of them able to fill the remaining positions in the finals. St Kevins had it all to play for knowing a loss would see them miss out while for the Rovers, as has been the case for the past few weeks, they were playing purely for pride.

The game got underway and in the first quarter it was all St Kevins, kicking five goals to one and having ten more scoring shots that the Rovers. They held a lead of 30 points and for the strong contingent of home supporters, it was a case of by how much with a blowout looking on the cards.

After the quarter time break, the Rovers came out looking a different side and after a sluggish start, turned their game around completely to put on six goals to the visitors two. The momentum had shifted with St Kevins intensity dropping considerably. Former Richmond player Mark Coughlan was quite for the visitors. At the main break, their lead had been reduced to just eight points. Chris Gleeson had kicked the bulk of the Rovers score in the first half with five goals.

The Rovers continued where they had left off, controlling the footy in the third term. A goal to Adam Power put the Rovers in front for the first time in the game and they went on to kick three for the quarter to St Kevins one. As the rain started to fall, the siren sounded and at three quarter time it was the home side leading by two points.

The Rovers kicked the first two majors of the final term and an upset was on the cards for the home side who were playing some great footy. The visitors got the next but the Rovers quickly replied and with five minutes remaining the Rovers led by 12 points.

With two minutes remaining, the visitors kicked a goal to reduce the margin to a single goal but the Rovers responded with a running goal from Leigh Fletcher on the boundary line in front of the clubrooms and the big Rovers crowd erupted, as did the players knowing that had sealed the game. The final siren sounded soon after with the home side victorious by 12 points.

It was one of the gutsiest Hampton Rovers performances seen at the Boss in recent years and the players were applauded off the ground before belting out the song for one more time in 2010. As the results of other Premier B games filtered through, St Kevins fate was sealed, missing out on a spot in the finals after being in contention to finish top-two all year. Old Carey, Old Haileybury, University Blacks and Old Ivanhoe made up the final four.

Matthew Robbins was rapt with his charges and he applauded the efforts of every player on the ground. Everyone contributed and made it a most memorable win to finish the year and Mattys final game in charge as coach. He finished by saying he couldnt wait to pull on the green and gold in 2011 and play with the guys.

The win was a great way to finish the season after a disappointing second half of the year in which the Rovers dropped a number of winnable games that if had gone the other way could have seen the Rovers push for the finals. Instead, the Rovers will use the Round 18 victory as momentum as they look towards 2011 and their third consecutive season in Premier B section of the VAFA.

In the Reserves, St Kevins were far too strong for the Rovers getting up by 64 points. Daniel Anderson was the only multiple goalkicker with two. Best was Andersen, Lee Smith, Josh Verlin and Lachlan Wheeler playing in his 200th VAFA game for the Hampton Rovers.

The Under 19s took on bottom-placed Old Haileybury, however due to Haileyburys APS school side having the week off, it was a substantially different side taking the field, and it worked for them getting up by nine goals to win their first game of the season. Youl, Baxter and Sperring kicked two each, best were Massie, Youl and Howe. The Rovers finished the season with two wins and a draw after being promoted to South (1) this year.

The 2010 HRAFC Presentation Night will be held Saturday 18th September at the Sandringham Football Club. All Hampton Rovers players and supporters are welcome along with tickets $50 per person for a two course meal and drinks at bar prices. Bookings can be made online – Click Here for all the details and to book your seat now.