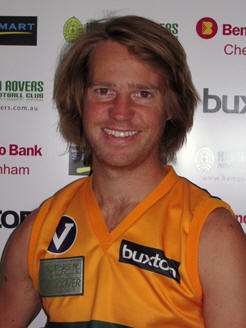 Lachlan Wheeler is set to become the fifth Hampton Rovers player to reach his 200th VAFA game milestone this year when the Reserves co-captain takes the field this Saturday against St Kevins.

Lachie joins Anton Duddy, Gerrard Woods, Adam Power and David Anderson who have all played their 200th VAFA game with the Rovers this season.

Wheels is a tireless worker around the club, doubling up as the Club Secretary (since 2008) which is a big role within itself. He made his debut for the green and gold in 1999 after previously playing junior footy with Bayside and Beaumaris. I his first year he was a member of the Under 19 Grand Final team while he has won numerous club awards including the Reserves best & fairest in 2001 and 2007. Lachie lists his most memorable game as the 2003 Round 17 clash against Old Brighton in which the Rovers turned around a five goal deficit at quarter time to win the game and consolidate B grade for another year.

Lachie is currently co-captain of the Reserves and is Mr Reliable. Every Saturday after playing, is always willing to assist the Seniors by running water without having to be asked, and doing his fair share off the ground after the game and during the week.

200 VAFA games is an outstanding achievement and its great to see another dedicated clubman reach this milestone. It would be great to see as many people as possible to cheer Lachlan onto the ground at 11:30am this Saturday at Boss James Reserve when the Hampton Rovers host St Kevins in the final game of the 2010 home and away season.