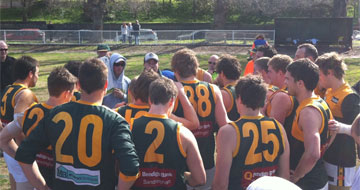 The Hampton Rovers suffered a disappointing loss at the hands of Melbourne High on Saturday, going down by five points to the bottom side in a tight finish.

With nothing riding on the result, both teams were playing for pride only, with Melbourne Highs relegation already confirmed and the Rovers unable to make the finals and well clear of the relegation zone.

Still both teams went hard at it, with the High School boys keen for a strong performance in their last home game in B section. They started with the aid of a strong wind and kicked six goals towards the South Yarra end with the Rovers managing three majors.

The home side was certainly playing much better footy than they did earlier in the season when the Rovers knocked them off by 99 points at Boss James Reserve.

The second term belonged to the Rovers kicking eight goals. Melbourne High went most of the quarter without a score until they kicked a goal late on. At half time it was the Rovers holding a 12 point lead.

The third term is what lost it for Hampton with numerous skill errors and the home side seemingly wanting the ball more. The wind seemed to have pick up and the Rovers struggled to get the ball out of their defensive fifty. In all, the Unicorns had 17 scoring shots converting eight of them as goals while like the opposition did the previous term, the Rovers managed just a single goal.

At the final break it was Melbourne High holding a solid 39-point lead however it was far from game over and the Rovers were confident of getting back into the game and recording a victory. The home side managed a goal against the wind but the Rovers went on a spree kicking five unanswered goals despite playing with 17 men after Tom Curry was sent off for verbal abuse.

With minimal time remaining, one goal seperated the sides. The Rovers got the ball down their end again however it went through for a behind. While the Rovers had the momentum, time wasnt on their side, and before they could manage another shot on goal the siren sounded, handing the home side a memorable five-point win.

Gary Carr and Chris Gleeson finished with three goals each with two each to Nick Lyall and Rob Alexander. Best for the Rovers were Leigh Fletcher, Gary Carr and Mark Devereaux.

The result continues a disappointing second half of 2010 in which the Rovers have won just one game. Next week they face third-placed St Kevins in the final game of the season Boss James Reserve.

Again it was the Reserves flying the flag for the Rovers, winning their third on the trot, defeating Melbourne High by three points. Jason Giasoumi kicked four goals while Brendan Robbins in his first Rovers game was one of four single goal-kickers. Better players were Jesse Donald, Ben Kezilas, Michael Flahive, Kyal McNeil, Tom Skewes and Lee Smith.

The Under 19s went down to local rivals Ormond by ten goals. Nick Jewell was the only multiple goal kicker with two while best were Rick Jones, Jack Sperring and Nick Hoban.