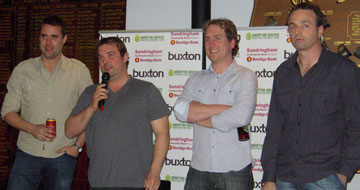 To reach this milestone is an outstanding achievement and to have four players reach to date this season is rare for a single club.

Ex-Geelong star Ronnie Burns MCd the night and provided plenty of laughs and some great stories of his playing days at Kardinia Park.

Each of the four players were roasted and then given standing ovations by the players and supporters in attendance.

First up was Anton Duddy who was interviewed by close mate Michael Flahive. Gerrard Woods was questioned by Matthew Buckers Lawrence. Both players continue to be valuable contributors to the senior side and hope to play for at least another couple of years citing that B grade finals would be a great achievement to reach.

Next up was Adam Power with Stephen Anderson firing the questions. Adam has returned to Melbourne this year following a few years in Sydney and while starting out in the thirds, has come up to play a few games in the ones in recent weeks. Finally, David Anderson took centre stage and was interviewed by Donny Scarlett with many funny stories and memories including his first senior game  the not-so-popular Thomastown at Thomastown trip.

Congratulations to all four players on this outstanding achievement.

Photos are available in the Photo Gallery here.