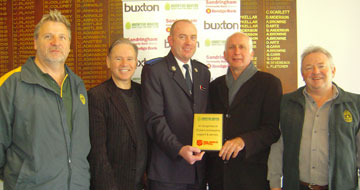 At the President’s Luncheon recently, the Salvation Army presented a plaque in recognition of 10 years of outstanding contribution to the Salavation Army by the Hampton Rovers.

For the past 10 years, the Hampton Rovers have been actively involved in all aspects of the Salvation Army Red Shield Appeal in the Bayside Region. Through the organisation of a hugh ‘fleet’ of door-knockers in Hampton Streets, with the deployment of collectors at busy street corners, through to the use of the Boss James Clubrooms as a Bayside collection base, the Rovers have made an outstanding contribution to the Red Shield Appeal in the Bayside Area.

In 2010, the Rovers effort has again been organised by the enthusiastic ‘Choco’ Bill Mirabito who has taken this role within the club to new heights in coordination and organisation. This year, Jane Chadwick – mum of youg Jack Chadwick in our U10 team – took the role of organising the Junior collection teams. This resulted in a team of children from our four Under 9, Under 10 and two Under 11 teams taking to the streets moving from door-to-door seeking donations for the appeal. Added to this team of collectors, the Rovers Under 19 team took up station at key Hampton St intersections for collection from vehicles and shoppers alike.

Whilst collecting significant funds for the appeal, the volunteers also gain an insight into the import work that the Salvation Army do for the community, as well as as gaining an insight into the fact that not all people are as fortunate as themselves.

Over the 10 years of collection, the Rovers has collected in excess of $75,000, which is an extraordinary effort by the club, and we look forward to continuing this vital work in 2011.