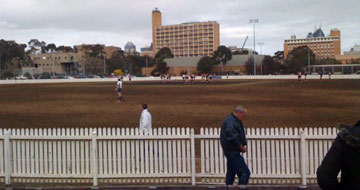 The Hampton Rovers came up short in another close one, this time going down to University Blacks by 10 points at Melbourne University on Saturday.

The Rovers had no less than seven changes going into the Round 14 clash and while they were several players short of their best line-up, they were always going to give it their all.

Recent rain and traffic had the normally-pristine University Oval looking more like a bog with the ground very heavy underneath.

David Robbins got the Rovers off to the perfect start and a goal to Chris Gleeson gave the visitors a two goal lead after 10 minutes. At the first break the Rovers held a 13-point lead.

It was a close game throughout with the margin never exceeding a few goals. Half time saw the home side hold a three point lead after a three goal to one second term.

Rovers forward Chris Gleeson continued to be the main man up-front kicking another couple in the third however a goal to the Blacks on the siren saw the scores all level at the final break.

Back in the side, Matt Lawrence kicked a goal before going off the ground with a knee injury and reducing the Rovers to only two players on the bench. University led by three points with five minutes and kicked another to seal the game, winning by 10 points.

The players put up a good fight but just couldnt get over the line and like a few games this year, this will be another looked back on that could have gone the way of the Rovers.

Gleeson finished with six goals, Robbins kicked two and Lawrence one. Best for the Rovers were Gleeson, Woods, Fletcher, Semmel, Robbins and Carr.

Next week the Rovers are back at Boss James Reserve taking on top side Old Carey in the second last home game of 2010.

The Reserves were soundly defeated by the top-placed Uni Blacks. The only goal for the Rovers coming from a freakish effort from Liam Woodland. Best were Daniel Andersen, Ben Kezilas, Ben Theodore and Shem Curry.

An undermanned Thirds were downed by top side Caulfield Grammarians while the Under 19s went down to second-placed Caulfield. Use the menu above to view full results and ladders.