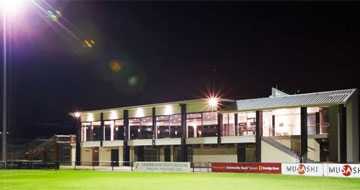 The inaugural Hampton Rovers AFC Gala Ball was a huge success with over 170 people packing the Sandringham Football Club for the clubs major function of 2010.

The brand new Sandringham Football Club was a spectacular venue for the evening and it came up a treat on the night.

The 172 guests in attendance represented all sections of the club: Juniors, Seniors and Auskick and included members, parents, supporters, sponsors, senior players and partners. The three course meal was delicious and the beverages flowed all night. Live band Donkey on the Edge were a hit and the dance floor was put to good use with it absolutely packed! All in all, everyone in attendance appeared to have a most enjoyable night.

As well as a fantastic social event, with the inclusion of the numerous auction items the event was an important fundraiser for the club to assist it with the ongoing monetary demands of running a football club.

We again thank everyone for their attendance and look forward to the upcoming events as we near the end of the 2010 season.