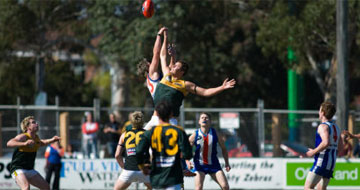 The Hampton Rovers host arch rivals Oakleigh at Boss James Reserve on Saturday. Its VAFA Rivalry Round this weekend and the Krushers are a fitting opponent considering some of the contests in recent years.

Oakleigh have risen through the VAFA grades at a solid rate and the two teams first met back in D1 section in 2007 where the Rovers won by three points. Oakleigh got revenge in the final round that year and subsequently had a solid victory over the Rovers in the Grand Final.

The Rovers responded in Round 1 2008 with a four goal victory, lost in Round 10, then had a famous 2-point victory over Oakleigh in the Preliminary Final at Trevor Barker Oval to rise back up to B Grade.

Earlier this year the Rovers had a convincing 8-goal win over the Krushers at WA Scammel Reserve. The two teams have built up a big rivalry in the past few years and this Saturday sees the next edition take place.

Hampton Rovers and Oakleigh are currently the two highest ranked district club’s in the VAFA and Saturday’s winner will no doubt take bragging rights until at least the end of the home and away season.

All Hampton Rovers supporters are encouraged to get down to Boss James Reserve for what promises to be a great game. For the Rovers its a must-win game following last weeks disappointing loss to ladder-leaders Old Ivanhoe.

Last-minute bookings are also being taken for the Pre-Game Rivalry Luncheon. Enjoy the full Hampton Rovers match-day experience and join us for lunch prior to the big game. Just $25  click here for details.

Live scores will be available from 2pm by following @HRAFC on Twitter.

Also on Saturday, the Under 19s take on Old Mentonians away at 2pm while the Thirds face Old Geelong at Como Park at 11:40am.

The Hampton Rovers Bar will be open immediately following the Seniors game until late with all supporters welcome back.