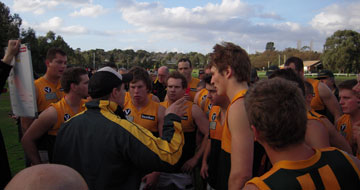 The Rovers held a 16 point lead at the final break, but it was Old Ivanhoe who finished the stronger team, defeating the Rovers by 22 points at Chelsworth Park on Saturday to put them back on top of the Premier B ladder.

It was perfect conditions for football at Pine Lodge and both teams were raring to go following the mid-season break. The Rovers had Tom Skewes come back into the team while Jesse Donald made his senior debut.

It was a fairly even first term but it was the home side that had the slight advantage and ended up with four goals to the Rovers two with Ed Turner kicking both. The visitors stepped up in the second stanza with the reverse score line and at the main break it was six goals apiece, with Old Ivanhoe leading by two points.

The majority of the third term was all Hampton. Fresh from representative duty, Guy Martyn in the middle along with Leigh Fletcher got the ball moving forward. A great finish from Semmel followed by a quick goal to Gleeson following a free for holding, a goal to first-gamer Jesse Donald followed by another for the Rovers, had Hampton up by five goals late in the third. But two late replies by the home side reduced the margin to 16 points at the final change.

The momentum had shifted and that continued in the final term as Old Ivanhoe eight goals to the Rovers two to win by 22 points. It was a most disappointing final quarter by the boys and there were obviously devastated after the final siren in game that was definitely winnable.

Chris Gleeson continued his good form up front kicking five goals while Ryan Semmel finished with three and Ed Turner two. Guy Martyn and Leigh Fletcher were the standout players for the Rovers.

The loss drops the Rovers back to eighth on the ladder equal with University Blacks however still just two wins off the top two sides, Old Ivanhoe and St Kevins. The Rovers now face Oakleigh and Old Essendon in two consecutive home games that they must win.

An undermanned Reserves team went down to Old Ivanhoe by 10 goals. Jason Giasoumi kicked two goals with Ben Theodore and Alex Ross best for the Rovers.

Back at Boss James Reserve, the Under 19s put in a good effort against top side Old Brighton but went down by 26 points in the end. Tom Youl was great up front kicking four majors. Chris Britton, Marlon Woltering and Jack Massie were amongst the best.

But the story of the day was the early game at home where the Thirds had their first win of the season, defeating Kew by four goals. Click here to read the Thirds match report.