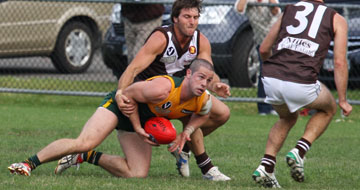 Following the Queens Birthday break, the VAFA resumes this weekend with the Hampton Rovers taking on second-placed Old Ivanhoe away at Chelsworth Park.

The relegated A grade side from 2009 started the season with all guns blazing leading the competition but have since dropped three games, however they still sit second, one win ahead of the Rovers on the VAFA Premier B ladder.

Hampton went into the break 5-4 and currently sit equal fourth on the ladder (sixth due to percentage). The Rovers have lost just once away from home this year and will be looking to continue their good form on Saturday. It promises to be a great game and all Rovers supporters are encouraged to get along and show their support.

Chelsworth Park is located on Irvine Road in Ivanhoe (Melways reference 31 G10)  see map. The Reserves get underway at 11:40am followed by the Seniors at 2:00pm.

Live Scores will be available by following @HRAFC on Twitter via your computer or mobile phone.

Also on Saturday, the Under 19s and Thirds are at home. At 11:40am the Thirds take on Kew, followed by the Under 19s taking on Old Brighton at 2:00pm. The Bar will be open following the U19s game until late. All Rovers supporters are welcome back to the club.