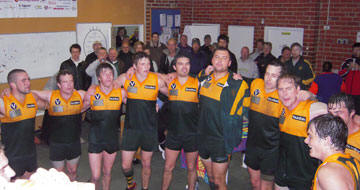 The Hampton Rovers demolished bottom-placed Melbourne High by 99 points in wet and miserable conditions at Boss James Reserve on Saturday. The Reserves also had a big win getting up by an even 100 points.

It was a good start to the day with over 80 people in attendance at the pre-game luncheon, including club legend Ross Smith who this week was inducted into the AFL Hall of Fame.

The Rovers jumped out of the blocks with Chris Gleeson and Guy Martyn opening the scoring for the home side. In all, the Rovers kicked eight goals to Melbourne Highs two to hold a commanding 44 point lead at the first break.

There were far less scoring opportunities for the Rovers in the second stanza and they could only manage the three goals with the Unicorns kicking one.  At the main break it was Hampton comfortably by 54 points.

The rain started to tumble early in the third term, it got very dark and the lights at Boss James were switched on. Despite the poor conditions, the Rovers played some good desperate footy and created a number of opportunities. They posted a further six majors with the visitors again kicking just the one.

The game was a forgone conclusion at the final break but the Rovers needed to push on to gain some valuable percentage. The weather only got worse but the boys didnt give up and to Melbourne Highs credit, they didnt either, showing plenty of endeavour in the atrocious conditions. Three goals in the last put the icing on the cake for the Rovers with the visitors adding a further one goal to their tally.

With no Danny Corp (injured), Chris Gleeson and Guy Martyn stepped up in the forward line kicking five goals each while Daniel Andersen contributed with four of his own. Better players for the Rovers included Jackson Ward, Guy Martyn, Tom Curry, Matt Terech, Ryan Semmel and Leigh Fletcher. Shem Curry in his senior debut also played well for the Rovers.

The win improves the Rovers position on the VAFA Premier B ladder to sixth, or equal-fourth, as they are even with four other teams on 20 points. The 99-point victory improved the Rovers percentage by 11% to 104%. The Rovers now have the mid-season break before taking on second-placed Old Ivanhoe away.

The Reserves also had a comprehensive defeat, thrashing Melbourne High by 100 points. The Rovers booted 17 goals while the visitors could only manage the one. Jason Giasoumi dominated up front kicking six goals. Matthew Gray kicked three with two each to Stef Constantinou and Lee Smith. Best players for the Rovers were Ben Theodore, Tom Skewes, Jason Giasoumi, Josh Schmitz, Lachie Wheeler and Dave OBrien.

The Under 19s were defeated by Ormond away with Ben Clarke best for the Rovers while the Thirds put in a good performance but were defeated by the highly fancied Richmond Central (aka 2009 Old Scotch XVIII) with Justin Tolliday best.