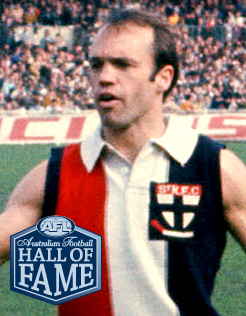 Hampton Rovers legend Ross Smith was one of six players inducted into the AFL Hall of Fame at a gala ceremony on Thursday evening at Crown Palladium. The former Hampton and St Kilda player joins an illustrious group of players.

Smith’s induction is a fitting tribute to a brilliant career that saw the courageous rover play 234 games for the Saints, including their 1966 premiership triumph.

Smith also played 39 games for Subiaco and was captain-coach of the club during its 1973 premiership.

He captained St Kilda on 68 occasions, but his crowning personal achievement came in 1967 when he won the Brownlow Medal. Smith took out St Kilda’s best and fairest award the same year and repeated the dose in 1971.

Smith would later be named in the Saints’ Team of the Century, coach the side in 1977 and complete three separate stints as an assistant coach.

In 2004, Ross Smith was inducted into the Hampton Rovers Hall of Fame, one of only 13 people.

FROM AFL.COM.AU
Out from the shadows
By Ashley Browne

The St Kilda Football Club underwent a fundamental re-birth in 1965.

After nearly a century at the Junction Oval the Saints packed and moved to the ‘burbs, setting up a new base at Moorabbin in the fast-growing southern suburbs of Melbourne.

And the Saints delivered the excitement in spades once they moved, with their first three years at Moorabbin delivering two grand final appearances, a premiership and a Brownlow Medal.

The 1965 grand final was the club’s first in 52 years but ended in a heavy defeat to Essendon.

In 1966, the Saints broke through for the flag, famously defeating Collingwood by a point. They’ve yet to win another flag since. And in 1967, the disappointment of not making the finals during their premiership defence was softened considerably by Ross Smith’s Brownlow Medal.

It was a marvellous time for a local product to be playing for the Saints and Smith was as local as they got, being recruited to St Kilda from Hampton Rovers, whose ground is just a couple of kilometres west of Moorabbin.

“We had a sense of wanting to start something new,” Smith said in an interview to mark his induction into the AFL Hall of Fame. “There was a sense of trying to establish ourselves at Moorabbin with a new group of supporters down there.”

Smith was a star footballer and something of a prototype. He broke into the St Kilda side in 1961, the same year as Allan Jeans took over as coach and spent much of his first few years with the Saints as a run-with player.

Jeans would have him shadow the likes of Essendon star Jack Clarke and South Melbourne’s triple Brownlow winner Bob Skilton because he had the fitness, the ability and the football smarts to go with them.

But then came time for Jeans to unleash Smith as a more attacking weapon.

Fit, skilful and smart he was the dominant player in 1967, winning a few media awards and then the Brownlow Medal. It was a fair achievement and when you consider that Ian Stewart and Darrel Baldock were his teammates at St Kilda – both Legends in the AFL Hall of Fame – you realise what a brilliant team the Saints had back then.

You might also wonder why the Saints only ever won one premiership with such a talented line-up.

Smith did play in a second premiership team, but had to leave Victoria to do so. He was appointed captain-coach of Subiaco in 1973 and achieved instant immortality when he led the club to the WAFL premiership, the club’s first flag in 49 years.

Among his teammates that year was Mike Fitzpatrick, then a promising young ruckman, later a Carlton premiership captain and now chairman of the AFL Commission.

Smith returned to Victoria in 1975, played one more year for the Saints and in 1977 was appointed coach for a season replacing Jeans, who had been in charge for 16 years.

The Saints won the wooden spoon in his only year in charge, but by this time Smith was forging a fine career in academia and was becoming a leading figure in coaching development and education.

He served on the national coaching committee for 16 years between 1975 and 1990 and then from five years was a member of the Australian Football Foundation’s technical committee.

While living in Canberra he was chairman of the AFL’s ACT Regional Board, and upon returning to Melbourne in 2000 was appointed general manager of game development for the AFL, a position he served in for four years, and during which the very early plans for a team in Greater Western Sydney were first hatched.

He has been chairman of the AFL’s Research Board since 2004, a body that holds great influence over the way the game is taught, coached, administered and played.

It is a role that gives Smith enormous pleasure and completes an impressive body of work in the game, although as he says, what he enjoys most out of footy these days is when the Saints win – which, luckily for him, is very often.

Ross Smith – By The Numbers