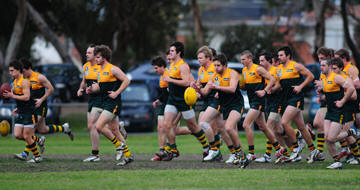 The Hampton Rovers are on the road again this Saturday when they take on St Kevins Old Boys Football Club in a season-defining match at T H King Oval in Glen Iris.

The Rovers currently occupy seventh spot on the VAFA Premier B ladder but are actually equal-third with four other clubs. A victory on Saturday could really set-up their season. However it does promise to be a tough game with the skobbers always a quality opponent, especially on their home turf and especially with the likes of former Richmond player Mark Coughlan running around for them.

Hampton are coming off a great win over the fancied Old Carey last weekend away while St Kevins had a convincing win over Old Essendon. The Rovers side remains largely unchanged with only a couple of changes.

In the corresponding game last year, it was St Kevins who snuck home by three points. They currently sit second on the ladder with five wins, one more than the Rovers. It will be a change of scenery for Saturdays game, due to St Kevins moving home base in 2010 from Righetti Oval in Kooyong to the T H King Oval on High Street in Glen Iris. Like the former ground, its also located beside the Monash Freeway  Click Here to view a map and located details.

The club encourages all supporters to get along and get behind the boys in this important game. The seniors get underway at 2:00pm with the Reserves at 11:40am.

Live Scores will be available from 2pm by following @HRAFC on Twitter or via Rovers Live. Simply visit www.twitter.com/hrafc from your computer or mobile phone!

The Under 19s take on arch-rivals Ajax away at Albert Park (Gary Smorgon Oval) commencing at 2:00pm.

The Thirds are the only team at home this week. They take on the top side, Caulfield Grammarians, at 11:40am. For those unable to make it along to St Kevins, make sure you get down to Boss James Reserve and show your support for the Thirds! Click Here for the team.

The Hampton Rovers Bar will be opening at around 6:00pm and all supporters and players are welcome back to the club for a drink following a big day of footy!