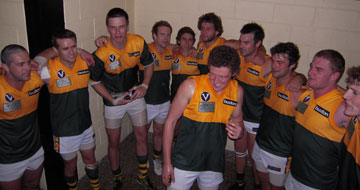 The Hampton Rovers are still undefeated away from home in 2010 after defeating in-form Old Carey by 15 points at Bulleen on Saturday.

Once again we had perfect conditions for footy, the main oval at the Carey Sports Complex was in pristine condition as always, and the Rovers got off to a flyer as they did last week.

Guy Martyn came back into the side and propelled the Rovers midfield as they controlled the first quarter to kick six goals to one and hold a 29-point lead at quarter time.

The Panthers stepped up in the second term, kicking four goals as the Rovers managed two. The home side was back in the game at half time but the Rovers still held a handy 16-point lead.

Three Carey goals to the Rovers two in the third term further reduced the margin and at the final break it was just five points the difference with it all to play for. The final stages of the third term saw Old Carey with all the momentum and they were confident of finishing strongly.

It took a while, but the Rovers eventually kicked the all-important first goal of the final term and then quality goals to co-captain Ryan Semmel and young-gun Ed Turner increased the margin to what looked like a gam-winning 28 points. Two late goals to the home side reduced the margin but the Rovers held on to win by 15 points.

It was a great win for the Rovers against an in-form Old Carey side that had beaten Old Haileybury and demolished St Kevins in the previous two weeks. It was also pleasing considering the number of players the Rovers currently have unavailable due to injury.

Next week the Rovers are away again, taking on second-placed St Kevins at their new home ground, T. H. King Oval.