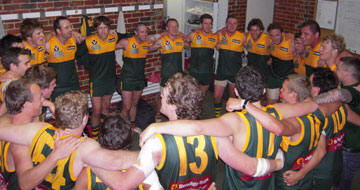 The Hampton Rovers broke through for their maiden home win of the season with a solid 33-point win over fifth-placed St Bernards at Boss James Reserve on Saturday.

It was perfect conditions for footy at David Street and the Rovers season was in danger of slipping away should another home loss eventuate. Coming up against a good side in St Bernards, who knocked-off the top side the previous week, and yet further injuries for the Rovers, including Guy Martyn, left the Rovers faithful a little nervous.

However coming off a ten-goal final term last week against University Blacks, the Rovers kept that momentum against the Snowdogs and booted nine majors towards the Southern end of the Boss to the visitors one to hold a big 50-point quarter time lead.

The confidence from the way the Rovers finished the game last week was clearly still evident with the boys moving the ball on well and few skill errors. No one could have asked for a better start and the players knew they only had to hold St Bernards from thereon to take the four points.

Two goals to the visitors four in the second term reduced the margin somewhat to 37 points at the main break. The third stanza saw the home side kick three goals while the Bernies managed two and at the final break it was the Rovers holding a 46-point advantage.

St Bernards had been disappointing up to this stage and they urged each other to put in a good performance in the fourth quarter walk off the ground with their heads held high. They did manage the first goal of the term. Tom Curry then took a mark at the top of the 45-arc, played on around his man and kicked a superb goal. The Rovers managed one more for the quarter while the visitors kicked another three.

With the final siren sounding, it was the Hampton Rovers notching up their third win of the season, defeating St Bernards 16.13.109 to 11.10.76.

With Guy Martyn out, Danny Corp took most of the responsibility up front, and he delivered, kicking six of the best for the Rovers. Big Matty Terech who played the majority of the game up front also, kicked three while Tom Curry kicked two goals.

Tom Curry and Jackson Ward, who this week were named in the VAFA U21 representative squad, were amongst the best for the Rovers (Guy Martyn was selected in the senior squad), along with Kyle Pinto, Daniel Corp, Gary Carr and Stuart Burggraaff.

The VAFA Premier B ladder is the closest in the competition. No less than five of the ten teams sit on 12 points, with the Rovers slightly inferior percentage meaning they currently sit eight, but equal fourth. Old Ivanhoe, University Blacks and St Kevins populate the top three positions, while Old Essendon and Melbourne High sit at the bottom.

The Rovers are away from home for the next two weeks and take on the in-form Old Carey at Bulleen in Round 7 action next Saturday. As Rovers coach Matty Robbins mentioned after the game, they must now start a run and lift a few positions on the ladder.

In the Reserves, St Bernards were too strong for the Rovers getting up by 6 goals. The Thirds were defeated by Kew by 11 goals while at Albert Park, Collegians were too good for the Under 19’s, getting up by 8 goals.