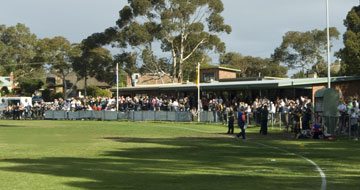 The Hampton Rovers play their second consecutive home game this Saturday when they host Old Ivanhoe at Boss James Reserve. Its also another triple-header, this time with the Thirds opening proceedings at 9:30am.

The Rovers will be hoping for a similar result to Round One when they took on the other side relegated form A Section last year, Old Essendon. Ivanhoe have started the year well with wins against Melbourne High and Old Carey. Hampton had a great win first up but were defeated by Old Haileybury last weekend in a high scoring affair where the Rovers played well, but the visitors played better.

A big crowd was on hand for our first home game of the season and it would be great to see another big one this Saturday in what promises to be another top VAFA Premier B game.

The players will observe one minute’s silence prior to the Seniors game in honour of those who fought for our freedom.

The Thirds who had a narrow loss in their opening game last week will get proceedings underway at 9:30am taking on Richmond Central, followed by the Reserves at 11:40am and Seniors at 2:00pm vs Old Ivanhoe.

Bookings are now being taken for the Home Game Luncheon. The opening lunch of the year received countless positive feedback and this week promises to be just as good, so make sure you book your spot and enjoy a quality meal prior to the seniors game. Commencing at 12:30pm, the luncheon costs just $25 per head and that also includes one standard drink and cheese & biscuits. The Bar is open from midday. To book your spot online, click here, or contact Jenny Voss on 0411 773 511. Payment is made on arrival.

We also encourage supporters to purchase a club membership. Bronze, Silver, Gold & Platinum all include home game luncheons and other benefits. Support the club and purchase one today. Click Here for all the details and to purchase online.

The Under 19 game this weekend has been changed due to a fixture re-shuffle. Old Geelong have been dropped back to Section 2, so the Rovers now take on Caulfield Grammarians at Princes Park in Caulfield (Melway 68 B6) starting at 2pm.

The Rovers Bar will be open from the final siren until late Saturday night. All supporters are welcome back for a drink.