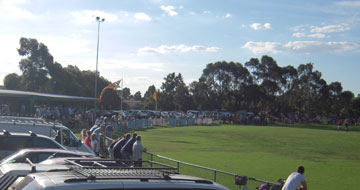 Hampton Rovers managed to kick 17 goals but went down to Old Haileybury by 42 points in a high scoring affair in their first home game of the season.

As expected a big crowd was in attendance for the local derby at Boss James Reserve in warm conditions with the temperature hitting the mid-20s.

The Rovers had a few missing from the previous weeks win over Old Essendon with ruckman Anton Duddy, half-forward Rob Alexander and small Kyle Pinto all out of the lineup. And with Guy Martyn still missing it was always going to be tough ask especially with the visitors only losing by a small margin to premiership contenders University Blacks the previous week, but the players were still confident of a good outing.

Despite kicking with the aid of the wind towards the David Street end in the opening term, the Rovers could only manage three goals to Haileyburys six. This would lead to Hamptons downfall – having to play catch-up footy for the remainder of the day.

The bulk of the scoring continued to be against the wind and the second quarter saw the home side reduce the margin by kicking five goals to four. At the main break it was only a two goal lead to the visitors and the game was up for grabs.

It certainly wasnt a case of the Rovers playing badly although there were a number of costly skill errors, but Old Haileybury did play exceptionally well and if there form on Saturday was anything to go by, theyll certainly be there-abouts come finals time.

Five goals by each team in the third kept the margin at two goals by the game opened out in the final quarter with Old Haileybury taking control of the contest. The visitors finished the game strongly and booted eight majors to the Rovers four, widening the final margin to 42 points.

It was a disappointing result for the Rovers after such a great start to the season the previous week but all the attention now shifts to Round Three and another home clash vs Old Ivanhoe who were relegated from A Grade last year.

In other VAFA Premier B games on Saturday, Old Ivanhoe easily accounted for Old Carey, University Blacks thrashed Old Essendon leaving them winless, St Bernards got over the top of Oakleigh and the struggling Melbourne High were defeated by St Kevins.

It was better news for the Reserves who had a convincing 55-point win over the Bloods. Matthew Gray and Joel Morgan playing his first game for the Rovers kicked three each, with Ashley Fisher, Jason Giasoumi and Tom McNamara kicking two each. Daniel Andersen, Tom McNamara and Ben Kezilas were best for the Rovers.

The Under 19s opened proceedings in the big triple-header and unfurled their 2009 premiership flag. Unfortunately it was a tough lesson for the boys in the higher division, going down to De La Salle by 13 goals. Jack Sperring, Tom Youl and Nick Jewell were amongst the best for the Rovers while Marley Collins was the only multiple goal kicker with two.

The Thirds who have a much stronger team in year two, put up a great effort against St Marys Salesian and even held the lead for a period in the final quarter, but ended up going down by three goals. Michael Flahive, new player Justin Tolliday and Graham Davis were best for the Rovers. Jason Laver kicked two goals.