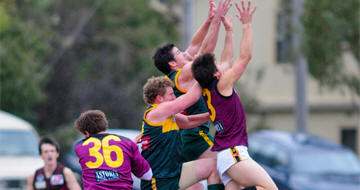 The Hampton Rovers play their first home game of 2010 this Saturday when they take on local rivals Old Haileybury in a big game at Boss James Reserve. The game is sure to attract another large crowd and all supporters are encouraged to get along and see the Rovers in action.

The first home game of the year is also a Triple-Header with the Under 19s kicking-off their season and unfurling their 2009 premiership flag first-up at 9:30am. Meanwhile over 100 people are expected to attend the Pre-Game Luncheon prior to the big clash. Book your spot now and enjoy the best lunches in the VAFA for only $25  read on for details.

The Rovers are coming off a great first-up win over 2009 A Grade side Old Essendon in Round One of the VAFA Premier B season away at Essendon Grammar School and now look forward to playing in front of a big Rovers crowd against the bloods.

Old Haileybury are sure to be a tough opponent as always. In their season opener, they were defeated by the highly-fancied University Blacks by only five points at McKinnon. They also feature ex-AFL star Brett Voss wholl make it a tough contest in the middle.

In 2009, the two teams were evenly matched with both teams winning their respective home games.

All Hampton Rovers supporters are encouraged to get down to Boss James Reserve for what promises to be a big day. The Under 19s commence proceedings at 9:30am taking on De La Salle. Prior to their game they will unfurl their 2009 premiership flag in front of the supporters and over 200 Hampton Rovers Auskick players. The Reserves follow at 11:40am and the Seniors at 2:00pm. Follow the Rovers Twitter for live scores or visit Rovers Live.

There has been strong interest in the first Home Game Luncheon of the year. Last year the corresponding match was the largest of the year and Boss James is expected to be near capacity again, so please book your spot early. $25 includes a great meal and one complementary drink. The bar is open from midday with the Luncheon commencing at 12:30pm. Bookings must be received by Thursday evening  either click here to book online or contact Jenny Voss on 0411 773 511. Payment is made on arrival. Read more here.

We also encourage supporters to purchase a club membership. Bronze, Silver, Gold & Platinum all include home game luncheons and other benefits. Support the club and purchase one today. Click Here for all the details and to purchase online.

Following the big game, all Hampton Rovers and Old Haileybury supporters are welcome back in the social rooms where the Bar will be open from the final siren until late.

The Thirds kick-off their season this Saturday, taking on St Mary’s Salesian at Glen Eris.