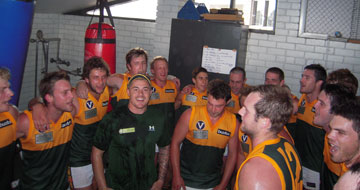 Matthew Robbins got his coaching career off to a winning start as the Rovers defeated 2009 A Grade side Old Essendon by 28 points at Essendon Grammar School.

It was a great performance by a new-look Rovers side that kicked eight goals to four in the final term to close out the game in a high scoring affair.

Round one of the 2010 VAFA Premier B season couldnt come quick enough for the players who had done a solid pre-season and the positive energy flowed throughout the game.

It was always going to be a tough encounter facing Old Essendon, who had been relegated from the Premier section of the VAFA the previous year, especially on their home turf. The home side kicked with the assistance of the breeze in the opening term.

Both sides came out firing but it was the Rovers that got the first goal on the board after a few minutes played. The bombers responded well kicking the next three and in all there were 11 goals booted in the opening stanza, with the home side kicking seven straight to hold a 16 point lead at the first break.

A five goal to one second term from the Rovers gave them a 12 point advantage at the main break and the match was certainly up for grabs in the second half.

There was nothing in the third quarter with Old Essendon kicking four goals to three to reduce the Rovers lead to just four points at the three-quarter-time break.

The intensity lifted another notch in the final quarter with both sides putting it all on the line. The bombers kicked two goals to one early on to give them a slight lead but the Rovers soon took control of the game running all over the home side and booting eight goals for the term to their four and ultimately winning the game by 28 points.

Daniel Corp playing his first game for the Rovers since 2008 was a strong up-front kicking six goals while the Rovers had 11 goal-kickers in total. Among the Rovers best were Anton Duddy, Leigh Fletcher and David Robbins making his Rovers debut. Also making his debut for the green and gold Adam McNeil played well, as did returning players to the club Nick Henry and Tom Skewes (senior debut).

Round 2 sees the Rovers play their first home game of the season, taking on local rivals Old Haileybury in a big game at Boss James Reserve. Its set to be a massive day at David St with the Under 19s opening proceedings in a triple-header and unfurling their 2009 premiership flag. Luncheon bookings are now being taken on the Rovers website at www.hamptonrovers.com.au.

In other VAFA Premier B games, Old Ivanhoe demolished Melbourne High by 109 points, University Blacks snuck over the line against Old Haileybury at McKinnon, St Kevins accounted for St Bernards at home and Oakleigh won their first ever B grade game getting up over Old Carey. The Rovers sit fourth on the ladder.

In the Reserves, Old Essendon got off to a flyer with the wind kicking six goals to none in the opening term. The Rovers won the second quarter but didnt really fire until the final term in which they kicked six, but still went down by four goals. Matt Terech was great up front kicking five goals while Daniel Andersen made a surprise return for the start of the season. The Thirds and Under 19s get their seasons underway next Saturday.