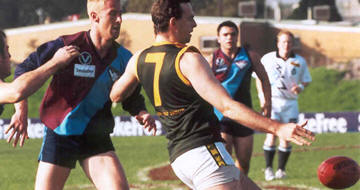 After a solid pre-season and multiple changes on and off the field, the 2010 VAFA Premier B season finally gets underway this Saturday with the Rovers on the road taking on Old Essendon. All Rovers supporters are encouraged along to support the players in the big season opener.

Its always difficult to know what to expect come round one, even more so in amateur footy it seems. On paper the Rovers side in both the Seniors and Reserves looks strong and the boys have worked harder than ever over the pre-season under the guidance of new senior coach Matthew Robbins.

Plenty of excitement surrounds the club and players on the eve of the new season. In the Seniors, the Rovers welcome back three players to the club, two players wholl play their first game for the club and a few more who didnt play regular ones last year for different reasons. Its a new-look Rovers side and the boys are eager to get the season off to a positive start.

Old Essendon will be a difficult assignment though, coming down from VAFA Premier (formerly A Grade) last year, and while losing a few players, word is thats been countered by a number of additions to create a new-look line-up for them.

The Rovers have traditionally kicked-off the season at home and this year will be the first time in many years the Seniors get the season underway on the road. The two sides last met in 2003, however most memorable for the Hampton Rovers is when the two sides met in the 2001 VAFA C Section Grand Final resulting in the Rovers last senior premiership.

All supporters are encouraged to make the trek across town and get behind the players as we aim to kick-off the season the best way possible. Old Essendon are hosting a luncheon and we have a table of 10 with a few spots on it still vacant for anyone interested  please call Jenny Voss 0411 773 511 to confirm ($25).

The Reserves who feature some familiar faces from the Seniors, get underway at 11:40am followed by the main game at 2:00pm. For those unable to make the game, Live Scores will be available via Rovers Live or follow @HRAFC on Twitter.

Old Essendons ground is located at Penleigh and Essendon Grammar School, no. 2 oval. Corner Rachelle & Keilor Roads, East Keilor (Melways 15 G10)  Click Here to view a map. Its located just off the Calder Freeway, not far from Essendon Airport. By all reports the ground is in great condition.

Following the game and a few drinks at the Old Essendon social rooms, Boss James Reserve will be open and all supporters are welcome back to the club.

The season for the Under 19s and Thirds doesnt commence until next weekend, however the Under 19s play Old Brighton in a Practice Game at Boss James Reserve Saturday morning.