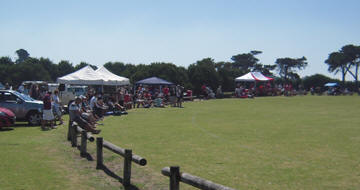 The Hampton Rovers had their first practice match of the year on Saturday with a solid hit-out against Ocean Grove Football Club. Over 60 players made the two hour trip to face the Grubbers in the three games.

The drought and subsequent Council restrictions has made scheduling a decent pre-season tough in recent years for all footy clubs in metropolitan Melbourne, so it was difficult to know what to expect for the Rovers first game. For most, it was the first time this year they had even worn footy boots, let alone run around on a full-sized ground.

But the seniors performed well, and while going down by four goals, many positives came out of the game. The improvement from the first half to the second was noticeable as players got back into the groove. The seniors were missing at least five of their best 22 with the likes of Martyn, Devereaux, Duddy, Burggraaff and Dave Robbins all unavailable.

The seniors welcomed new players Tom Skewes and Adam McNeil into the team who both performed well, Shem Curry who was impressive in he Reserves stepped up to play a hand in the main game while several others who werent regulars last year had a chance to impress.

New Hampton Rovers coach Matt Robbins was happy with the teams performance and took the opportunity to try different players in different positions and experiment with other aspects of the game and structure. Overall it was a great hit-out for the boys and good preparation for the season ahead. Its hoped the game may become an annual one with former Hampton Rovers player and U19 coach Cameron McGregor in charge of Ocean Grove for the first time this year.

Next Sunday the Rovers take on EFL side Donvale at Mentone Grammar Playing Fields in Keysborough. The following week the Rovers take on Ajax also on Sunday and at the same venue, before the Easter break and then Round One away at Old Essendon.

In other news around the club: