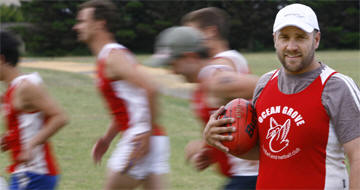 The Hampton Rovers take on Ocean Grove FC this Saturday in the first practice hit-out of 2010. After a solid pre-season, the boys are looking forward to finally getting some match action.

Its the first game in charge for new Rovers coach Matt Robbins, while its a similar story at Ocean Grove with former Hampton Rovers player and U19 coach Cameron McGregor in charge. Its his first senior coaching gig; he most recently was senior assistant coach at Ormond.

While the Rovers are missing several players mainly due to Cricket, there are still around 65 making the two hour trip to Ocean Grove for the three games. The Under 19s will get things underway at 10am, followed by the Reserves at midday and the Seniors at 2pm.

Ocean Groves main ground is unavailable so the games will be held at the Collendina Caravan Park Football Ground. Entry is via 177 Bonnyvale Rd in Ocean Grove  drive through the Caravan Park and the ground is situated at the end. Click Here to view a map of the ground, and click here for suggested directions from Hampton.

All players and supporters are encouraged along to support the three teams as we kick-off what promises to be an exciting year for the club.