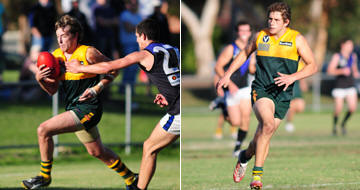 The Hampton Rovers Amateur Football Club is pleased to announce Gary Carr and Ryan Semmel as new senior co-captains of the club and lead the charge in VAFA Premier B in 2010.

Meanwhile Leigh Fletcher has been announced as vice-captain. The remainder of the senior leadership group will be announced in the coming weeks.

The lead-up to the 2010 season has been an exciting period for the club under new coach Matthew Robbins with new-found confidence and commitment amongst the playing group. Record numbers at training and a solid pre-season has supporters of the green and gold optimistic of what lies ahead in the upcoming season.

Carr and Semmel join an elite group of 29 players that have had the honour of leading the Rovers in the clubs proud 81-year history. That group in recent times includes the likes of LeGrand, McKellar, Anderson, Fletcher, Brown and most recently, Lawrence.

Captain for the past three years, Matthew Lawrence relinquished his role during the off-season putting the team ahead of himself. Buckers has to be congratulated on a wonderful stint as club captain and the way he conduct himself throughout that period. During the past three years Matt has guided the team from D1 to B Section and consolidated the clubs position in the second-top division of the VAFA for 2010.

It wasnt an easy decision for the new coach with a number of players in contention for the leading role. Robbins said of the appointment,

The key factors Ryan and Gary possess are high training ethic, ability to inspire the group though actions on the field as well as words off the field. Both player have shown good leadership skills and are looking forward to the challenges that lie ahead.

This is the first senior co-captain appointment in the history of the Hampton Rovers Football Club and they should be very proud of this achievement.

Gary Carr is a three-time senior best & fairest winner at the Rovers and first played for the club in 1998. He has played a total of 184 club games, played in the 2001 C Section Premiership and represented the VAFA on one occasion. Gary is one of the more experienced players in the side and has been a consistent performer for many years. He steps up as co-captain following three years as vice-captain of the seniors.

Gary had the following to say after the announcement,

Its an absolute honour to get the chance to captain the club I have played my entire senior career at and have so much respect for, to join some of the great names that have lead the club is quite humbling.

Ryan Semmel made his Rovers debut in 2004 playing 18 junior games. He played for the Sandringham Dragons before being subsequently picked up by the Sandringham Zebras. After a brief stay at his schools old-boy club De La Salle, Ryan returned home to the Rovers in Round 2, 2008 and has been one of the Rovers best players since. He has played 68 games for the club and has many years ahead of him.

Its an enormous privilege to be a leader amongst such a talented group and I look forward to leading the boys alongside Gary on and off the field.

The Hampton Rovers play their first practice match of 2010 when they play Ocean Grove away on Saturday 13th March while the first game of the 2010 VAFA season sees the Rovers travel to Old Essendon on April 10th. The first home game of the season is a Round 2 local derby against Old Haileybury. The club is still welcoming new players for our four senior teams in 2010, more details can be found by clicking here.