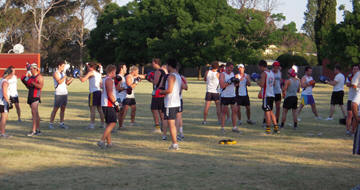 The Hampton Rovers 2010 campaign got underway Monday evening with player numbers in the mid-40s attending the first pre-season training session despite the 30+ degree heat.

It was Matty Robbins first session in charge as new coach of the Rovers and there was a great feeling among the group. Training continues each Monday, Wednesday and Friday until 18th December. The campaign will be mixed up to include fitness, skills, boxing, gym, spin and beach sessions. All players are encouraged down for a run as the club looks forward to an exciting year in 2010.

Meanwhile, the club has announced the first two practice games of 2010 with the Rovers set to face Ocean Grove Football Club at Ocean Grove on Saturday 13th March. They recently signed former Rovers player and Under 19 coach Cameron McGregor as new senior coach. The following weekend the Rovers will play Donvale FC, as they did last year, at Mentone Grammar Playing Fields in Keysborough, while the venue is the same for the third and final game the weekend after, but the opponent will be announced shortly.

The VAFA today confirmed that the 2010 season will commence the weekend after easter, Saturday 10th April, with the Rovers expected to open the season at Boss James Reserve.