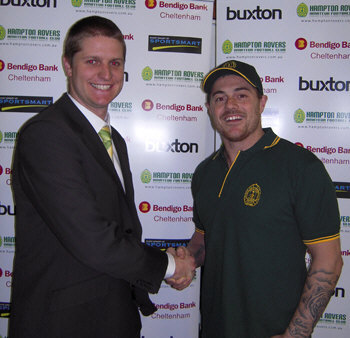 The Hampton Rovers Amateur Football Club is thrilled to announce former Western Bulldogs star Matthew Robbins as new senior coach for 2010 in B Section of the VAFA.

Having played 13 seasons at the highest level with Geelong and Western Bulldogs under the likes of Gary Ayres, Terry Wallace and Rodney Eade, Robbins brings a wealth of experience to the Rovers in what is sure to be an exciting period for the club.

After three seasons at Geelong, Robbins made his mark at the Western Bulldogs where he played 139 senior games over ten seasons, developing into the role as a small forward, kicking 135 goals for the club. 2006 was considered one of his best seasons, before he announced his retirement at the conclusion of the 2007 campaign.

Following his retirement from the AFL, Matthew has played the past two seasons in the VAFA with arch rivals Ormond and has recently expressed his desire to develop his football career in a coaching capacity.

Hampton Rovers AFC president Tim Wilson expressed his delight in securing Robbins as senior coach of the club, We are stoked to get Matt Robbins to our club, he represents what our football club is about and that is professionalism, honesty and above all our feedback is that his character is unquestionable.

Tim went on to say, The players and committee feel its an exciting time for our football club and we are in a position to be successful in the coming years and the knowledge of Matt Robbins will be invaluable for our young playing list.

After consolidating their position in B Section of the VAFA in 2009 following two successive Grand Final appearances, the Hampton Rovers are striving to be a successful club in the upper grades of the association and the appointment of Matthew Robbins is integral to the plan moving forward.

Plans are already well underway for Hampton Rovers assault on B Section in 2010 with pre-season details currently being finalised. Information will be posted on the Hampton Rovers AFC website as it becomes available.