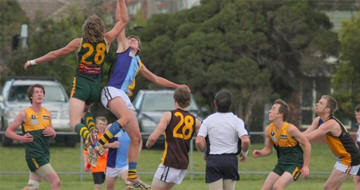 Its been ten years since the last Hampton Rovers U19 premiership and the team of 2009 has the chance to taste Grand Final glory this Sunday when they take on Old Mentonians at Trevor Barker Oval.

The Rovers finished the 2009 home and away season as minor premiers and were first through to the Grand Final after defeating Ajax by 15 points a fortnight ago at Elsternwick Park. Ajax, who had been one of the standout teams during the season, went out in straight sets when they were steamrolled by OMs by 75 points last Sunday.

Hampton Rovers and Old Mentonians have met twice so far in 2009 with the ledger all square at one a piece. In Round 4 the honours went to OMs who defeated the Rovers by five points at Keysborough, while in the final round of the year, it was the Rovers getting up by seven points at Boss James Reserve.

Sundays Grand Final at Trevor Barker gets underway at 11:20am and all supporters are encouraged along to cheer on the boys as they look to bring home the flag.

All supporters are also welcome to the final training session this Thursday evening at Boss James Reserve from 6pm. The Bar will be open and food available. Team selection for the season decider will take place around 8pm.

And following the game on Sunday, everyone is welcome back to Boss James Reserve where the Bar will be open until late to reflect on a great season for the Rovers.

*Book Now for the 2009 Hampton Rovers Presentation Night 19/09/09 at The Powerhouse. All supporters welcome. Click Here.

With only 5 days to go to the biggest day of the year the young Rovers are enjoying the final weeks preparation before the big day.  A romp at Hampton Beach on a couple of days, some serious training last Thursday and then with no game last weekend most attended a voluntary training session at the Boss on Sunday morning.  We then headed down to the Trevor Barker Oval to watch Ajax take on Old Mentonians in the Preliminary Final.

While most of us had our money on the Jackers it was clear from the outset that the OMs had come to play and a strong first quarter by them against the breeze set the tone for the day where they were simply too quick and precise for their Ajax opponents.

Quonny made copious notes on the opposition guns and while we felt we knew Ajax pretty well much time was spent assessing the lesser known OM players.   It was pleasing to see that their major goal scorers were well held by Ajax opponents who struggled against us the previous week.  But it was the OM ball movement into the forward line that was fast and accurate and gave the Ajax backs little chance to stop the flood of goals after quarter time.

Down back we struggled to see where OMs had the strength to hold our forward line that could be stacked with high marking forwards or alternatively loaded with some pacey alternatives.   Which way will the coach go?

The centre square contests will be the key.  Will Sperring, Ivory and Woltering take on the OMs talls or will Lovig make a return to the ruck?  Gossey into the centre or will the tried and true brigade of Turner, Howe and Naulty see us through?  Well need Robbie J on song and continuing on his good form from the second semi.

We know that the Mentone forwards will not get an easy kick.  Britts, Rich and Hobes were seen in serious discussion on Sunday morning assessing their likely opponents.  What a clash it will be when that group line up on Sunday!

Add into the mix the run of Baxter and Culvenor around the ground and the goal shooting prowess of Innes, Fallon and Lewis and I cant see how we can be beaten!   My tip is the Rovers by five.