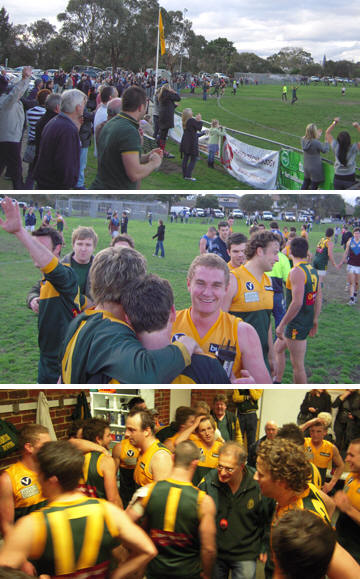 Boss James Reserve had game of the day status on Saturday with Hampton Rovers facing Ormond fighting relegation. The Rovers led from start to finish and snuck in by 4 points to consolidate their spot in B Section for 2010.

The final round encounter had big repercussions with the two famous district clubs going head-to-head – with the loser to be relegated to C Section and the winner to remain in B.

Despite the wet weather, a big crowd descended on Boss James Reserve for the next instalment of this great rivalry. There was very little wind however the ground was wet from overnight and morning rain.

The Rovers had several big inclusions from previous weeks including the likes of Ryan Semmel, Guy Martyn, Rob Alexander and Leeroy De Boer.

The Rovers kicked the opener and dominated play early on, going on to kick a further three before Ormond kicked their first. At quarter time, it was the home side by 22 points.

A further eight goals to three in the second term capped off a great first half for who led by 28 points.

Ormond came out a different side in the third quarter and after a slow start, started making an impact on the scoreboard, kicking six goals to the Rovers three. At the final change, the margin was reduced to just nine points.

The final quarter was a tense one with the big crowd getting involved in the game. The Rovers kicked a major with Ormond responding almost immediately and a further goal to the visitors reduced the margin to within a kick very late on. This remained for the last few minutes with some desperate footy being played. In one of the final pieces of play, Ormond worked the ball down the clubrooms wing towards goal before Rovers defender Thom McCarthy took a contested two on one mark, similar to that of Leo Barry in the final stages of the 2005 AFL Grand Final, stopping Ormonds attack. Shortly after, the final siren blew and the Rovers crowd erupted, while Ormond were understandably in despair as they had fallen short by just four points.

Ormond has had the wood over in recent times including winning the 2008 C Section premiership. Saturdays win was finally some sweet revenge to defeat the Monders and relegate them to C Section. Now for the Rovers its onwards and upwards as the clubs looks to a strong 2010 in B Section.

Chris Gleeson was best for the Rovers. It was a good all-round team performance with no major standouts. Guy Martyn and Ryan Semmel kicked three goals each with two to Luke Dallas and Josh Verlin.

Joining Ormond is Old Camberwell who were also relegated after being humiliated by Old Haileybury. B Section this year was one of the closest ever, with six teams still pushing for finals and the remaining four fighting relegation going into the final round. As of 4:30pm Saturday the final four was finally set with Old Melburnians (52 points) securing the minor premiership on percentage, followed by St Kevins (52), St Bernards (46) and Old Trinity (40). Uni Blacks and Old Haileybury also finished on 40 points but had an inferior percentage.

In the Reserves, Ormond kicked the final two goals of the game to force a draw in a low scoring affair.

On Sunday, the Under 19’s defeated Ajax by 15 points in the Second Semi Final at Elsternwick Park to book a spot in the Grand Final in a fortnight. Click Here for the full match report.

*Book Now for the 2009 Hampton Rovers Presentation Night 19/09/09 at The Powerhouse. All supporters welcome. Click Here.