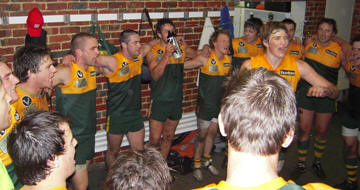 The Hampton Rovers returned to the winners list on Saturday defeating fourth-placed Old Trinity by 27 points at Boss James Reserve.

The last time the two teams met, the Rovers put in their worst performance of the year however the boys on Saturday put in a top performance to defeat one of the standout sides in the competition. The game was a scrappy one, but the Rovers were in control throughout to record a comfortable victory.

The home side made a good start kicking four goals to two in the opening term towards the David Street end. A further three goals to one in the second term gave the Rovers a comfortable 25 point lead at the main break.

The Rovers went on and kicked five goals in the all-important third term with Old Trinity managing four however they missed several opportunities. Old Trinity kicked the opening goal of the final term but this was followed by a Rovers major, and both sides kicked another goal each before the final siren.

The Rovers remain in eighth position on the B Section ladder on four wins however three teams are above them on four wins (Haileybury, Uni Blacks & Ormond) and the Rovers are just two wins and percentage out of the top four, once again demonstrating how close B Section is in 2009.

Next week the Rovers travel to Bulleen to take on Old Carey at the Carey Sports Complex.

In other games the Reserves were comprehensively beaten by a strong Old Trinity outfit with Ben Kezilas best for the Rovers while the Thirds kicked nine goals but went down to Caulfield.

The Under 19s defeated Parkdale Vultures by 8 points at Gerry Green Reserve to remain in second top position on the ladder. Full U19 Report.