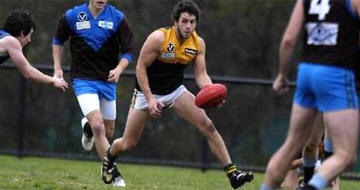 It was another game they should have won, but inaccurate kicking again cost the Rovers, kicking 9.18. Ormond had a strong final quarter and ran out 24 point winners at E.E. Gunn Reserve.

The last time the two teams met was the 2008 Grand Final and this time redemption was on the minds of the Rovers as the two proud district clubs went head to head in Rivalry Round of the VAFA.

The Rovers looked sharp early however it was a tight first term and both sides could only manage a goal each. The game opened up a little in the second with the goals starting to flow. At the main break, both teams had five goals on the board with the Rovers holding a four point lead.

Ormonds four goals to three gave them a slight advantage at the final changeover and the Rovers were kicking with the wind in the final term. However the green and gold couldn?t capitalise on their opportunities, kicking just the one goal and five behinds while Ormond came home strong kicking give majors towards the clubrooms end.

A bit of niggle started to creep into the game and as the final siren blew, it was the home side running out 24 point winners.

Congratulations to Gary Carr who played his 150th senior game for the club. After missing last week to injury, Gary returned for the Rovers and put in another solid performance. Gary has been one of the Rovers most consistent and most decorated players since his debut in 1998 and has played a total of 175 games for the club.

Saturdays lost sees the Rovers drop from 6th to 8th on the B Section ladder and next week sees them take on University Blacks at Melbourne University which is now a crucial game for the club.

In the early game, the Reserves were defeated by a strong Ormond outfit. Matt Gray and Jeremy Yelland were the goal kickers with Matt Law, Lachie Wheeler, Jesse Donald and Lee Smith best for the Rovers.

The Under 19’s had a 100 point victory over Beaumaris at Boss James Reserve. Matt Innes led the way in front of goals with five. Three each to Brenton Stevens and Zeke Lewis and two to Max Greenway and Jordan Goss. Tom Youl, Brenton Stevens and Nick Jewell were amongst the best players for the Rovers. Click Here for the full report.

The Thirds had the bye following South Melbourne pulling out of the Club XVIII competition.