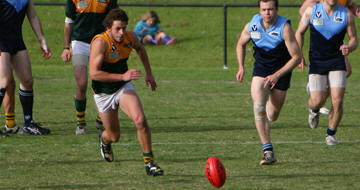 The Hampton Rovers won their second consecutive game on Saturday with a superb five-point victory over Old Camberwell lifting them to fifth on the B Section ladder.

The Rovers travelled to Gordon Barnard Reserve high on confidence following their first win of the season last week against Old Carey. A strong wind worth about four goals was favouring the north-eastern pocket and the Rovers had the luxury of kicking with it in the opening term.

Hampton kicked the first goal of the day within the first minute and maintained the lead for the entire game. The Rovers kicked away somewhat but Old Camberwell fought back well and reduced the margin to a single goal at the first break.

In the all important second quarter against the wind, the Rovers managed to restrict the home side to two goals while kicking two of their own and again at the main break it was still a single goal the margin.

After kicking seven goals in the opening half, the Rovers went on a spree in the third term booting eight goals to three to blow the margin out to 40 points. However the game was far from won with Old Camberwell having the advantage of the wind in the final stanza.

Momentum shifted to the home side and they slowly crept their way back into the game. With the clock exceeding 30 minutes, Old Camberwell got themselves within seven points. A goal to the Rovers then another to OC brought it back to seven. Another behind made it six and the pressure was right on the Rovers. With every Hampton supporter at the ground yelling for the siren, the ball went through for another behind to make it five points. The Rovers held the ball up and the final siren finally sounded after 34 and a half minutes resulting in a Rovers win.

It was a super effort by all players and a memorable win for the club. The game featured some individual brilliance with freak goals to Ryan Semmell and Leigh Fletcher. Both were also the two best players for the Rovers along with Gerrard Woods who had a great performance down back,  Rob Alexander, Mark Devereaux and Ben Theodore.

Fletcher, Semmell and Jason Zampaglione all finished with 3 goals each, Matt Lawrence, Rob Alexander and Luke Dallas 2 each with singles to Joel Steendam and Josh Verlin.

The 5 points victory sees the Hampton Rovers rise to fifth position on the ladder and sets up a big clash against ladder leaders Old Melburnians at Boss James Reserve this Saturday. Once again proving how even B Section is this year, five teams share a 2-3 record with fifth to ninth position all on eight points, however the Rovers have the superior percentage.

The Reserves also defeated Old Camberwell notching up their first win of the 2009 season. The Rovers were up by a considerable margin early in the final term but the home side kicked late goals to reduce the margin to 13 points. Better players for the Rovers included Jesse Donald, Matt Gray and Matt Ellis while Lachie Jones led the goal kicking with 5.

Meanwhile at Boss James Reserve, the Under 19’s had an easy 134 point victory over a depleted Melbourne High. Matt Innes starred with 8 goals, Fallon was again in the mix with 6 and Zeke Lewis kicked 4. Click Here to view the U19 report. In the early game, the Rovers Thirds were defeated by Old Geelong.