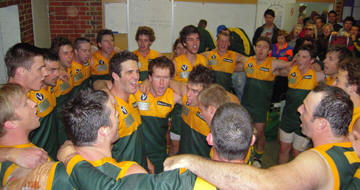 Following good performances in the opening three rounds, the Hampton Rovers produced their first victory of the season with a stellar final quarter defeating Old Carey by 49 points at Boss James Reserve.

Despite three losses in the opening rounds of the 2009 season, the Rovers confidence remained high after being well and truly in each of the previous games, including going down by just a few points to the only undefeated team in St Kevins last weekend. Back at home after two weeks on the road and facing the winless Old Carey, the Rovers were super keen to get a win on the board.

In overcast conditions on the deteriorating Boss James Reserve surface, the Rovers kicked towards the David Street end in the opening term and booted 6 goals to 4 to lead by 11 points at the first change. It was more of the same in the second quarter with the home side managing 4 goals to 2 to further strengthen their advantage at the main break.

Leaping Leeroy De Boer took an absolute screamer early on in the third quarter however the Rovers lost their only quarter in the third kicking 2 goals to 4 including two late majors to the visitors reducing the Rovers lead to just 11 points at the final change.

The Rovers started slowly but then built momentum and finished with a few party tricks booting 7 goals in the final quarter with Old Carey managing just the one. As the final siren blew it was the Rovers getting up 19.12.126 to 11.11.77 – a 49 point win to open Hamptons account in B Section.

Due to the closeness of the competition, the Rovers first win sees them move from bottom to seventh on the ladder and have the fourth best percentage. With confidence high, the Rovers next week travel to take on Old Camberwell.

Both Ryan Semmell and Luke Dallas finished with 4 goals each, captain Matt Lawrence 3, Mark Devereaux and Rob Alexander 2 each and singles to Duddy, Gino, Verlin and De Boer. It was another great team performance with all players contributing to the win. Better players on the ground included Anton Duddy, Ryan Semmell and Rory White.

In other games, the Reserves had a close loss going down by 10 points. Matt Gray, Lachie Wheeler and Ben Kezilas were best for the Rovers while Nick Pinto and Jeremy Yelland kicked two goals each and James McCarthy one. The Thirds were ?krushed? by Oakleigh. Best players were Laim Woodland, Matt Terech and Matt Powell while the goals were kicked by Tom Cougan and Mick Freedman.

The Under 19s suffered their first loss of the season going down to Old Mentonians in a close one by 5 points. Ed Turner, Pat Ivory and Jesse Gould were among the best. Youngster Ned Fallon kicked lead the goal kicking with 4 with Matt Innes and Zeke Lewis kicking 3 each. Click Here for the full report, or see the U19 team page.