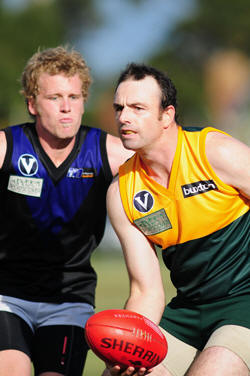 Hampton Rovers marked their return to B Section with a strong performance yet went down to one of the Premiership favourites University Blacks by 16 points at Boss James Reserve on Saturday.

The Rovers either matched it or were the better of the two teams for three of the four quarters but a disappointing period from late in the first term to half time which saw a nine goal run to the away side as well as some inaccurate shots at goal and skill errors to the Rovers proved the difference on the day.

After being relegated from A Section in 2008, University Blacks went into the season opener as $3.25 flag favourites according to official SportsBet odds however early on it was the Rovers setting the pace who kicked the opening two goals in a tight start.

From there though it was all the away side as the Blacks went on a nine goal to zip run and blew the scoreline out to a 43-point half time lead. The pace of the game and high skill level was evident as the high standard of B Section was on show for the first time at Boss James Reserve since 2003.

The Rovers regrouped at the long break and came out as a different side in the second half, getting back into the game with a 5 goal to zip third term, reducing the deficit to just 11 points. If not for some inaccurate kicking in front of goal however the Rovers could have had the lead.

The final term went goal for goal and late on the Rovers played with 17 men for the second time in the game. Both sides kicked 4 goals each and University Blacks held on for a 16 point win.

While disappointed with the loss, many positives could be taken out of the game and the Rovers look forward to the return of some key players in the coming weeks.

Anton Duddy was doing great things for the Rovers in the ruck while Matt Lawrence still managed 3 goals despite being restricted by the oppositions full-back all day. Thom McCarthy, Ryan Semmel and Leigh Fletcher also played well for the home team while the other multiple goal kickers were Kyle Pinto and Josh Verlin with 2 each.

The Reserves were also defeated by a very sleek University Blacks outfit while the Under 19s got up in the other game of the Boss James Triple-Header on Saturday defeating Parkdale by 4 goals (click here to view U19 report). Meanwhile the Thirds were defeated by Ormond in their first game at Elsternwick Park. The positive for the club was 94 players took the field for the Rovers in the four teams on Saturday – a club record.

Next week the Rovers take on St Bernards in a big Anzac Day clash away at St Bernards College at the later start time of 2:30pm. The U19s are also away while the Thirds are at Boss James Reserve with both games commencing at 12:00pm.